(Roadwarden is an illustrated text-based RPG in which you explore and change a hostile, grim realm. It combines game systems of RPGs, adventure games, and Visual Novels.)

The last few months have resulted in a multitude of updates and advancements to the game. The content keeps growing, with new places to visit, NPCs to talk to, and quests to take care of. There were also many bug fixes and behind-the-scenes changes that won’t be quickly spotted by most players, but will enhance the overall experience.

A new milestone has been reached, and today we’re going to talk about some of its highlights without getting too deep into the spoilers.

1. The Player Character’s goals have been reworked

In the previous versions of the game, the “goal” was mostly serving as a personal motivation supporting role-playing. The player could decide why their character has hit the road, with the assumption that the overall “success” or “failure” in the game’s main story would be connected to this goal in the game’s epilogue, and maybe in some minor dialogues. 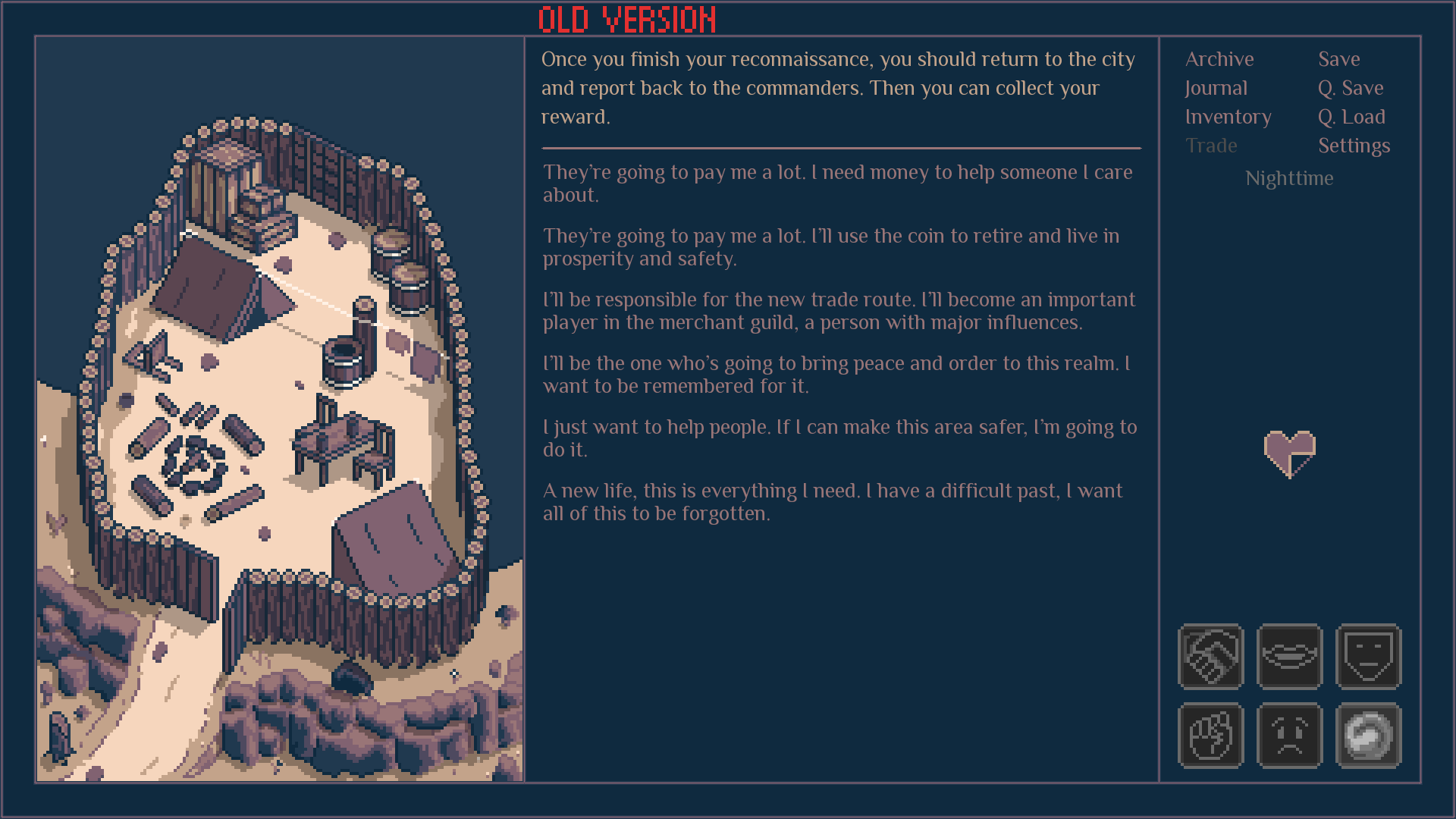 From now on, these goals will bring to the table a new system. They sound similar, but are now something that requires an active involvement from the player during the course of the game. They have a new journal entry, and a unique reward for completing them. 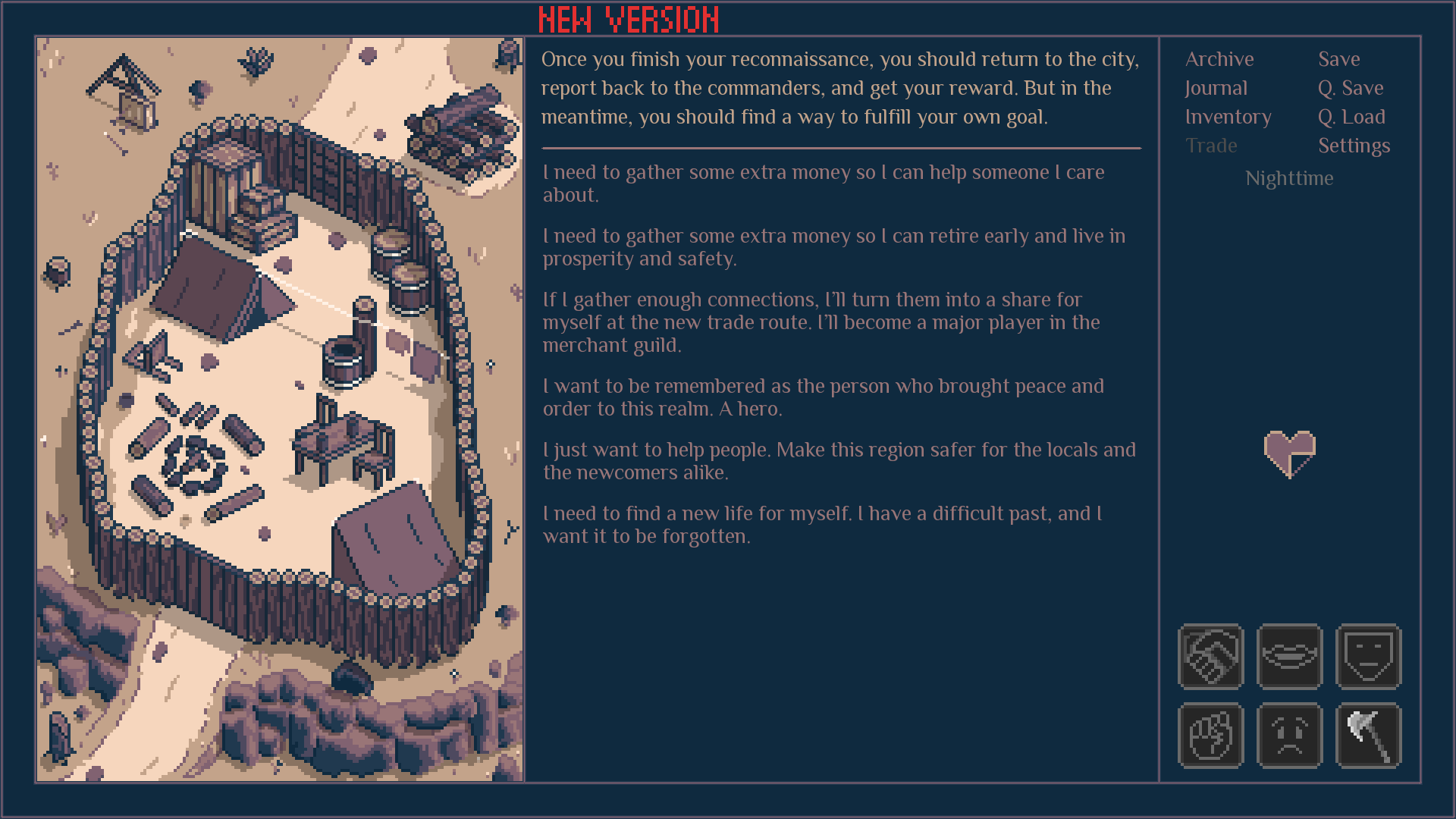 I hope it will help them be something that is actually played with, and not just pushed to the back of one’s imagination.

2. The reworked resting system and the new night scenes

After some redesigning, it’s now easy to introduce additional events happening in the middle of the night. Some of them are specifically focused on portraying the game’s fantasy setting and providing the player with the opportunities to role-play and consider the struggles of being a traveler. 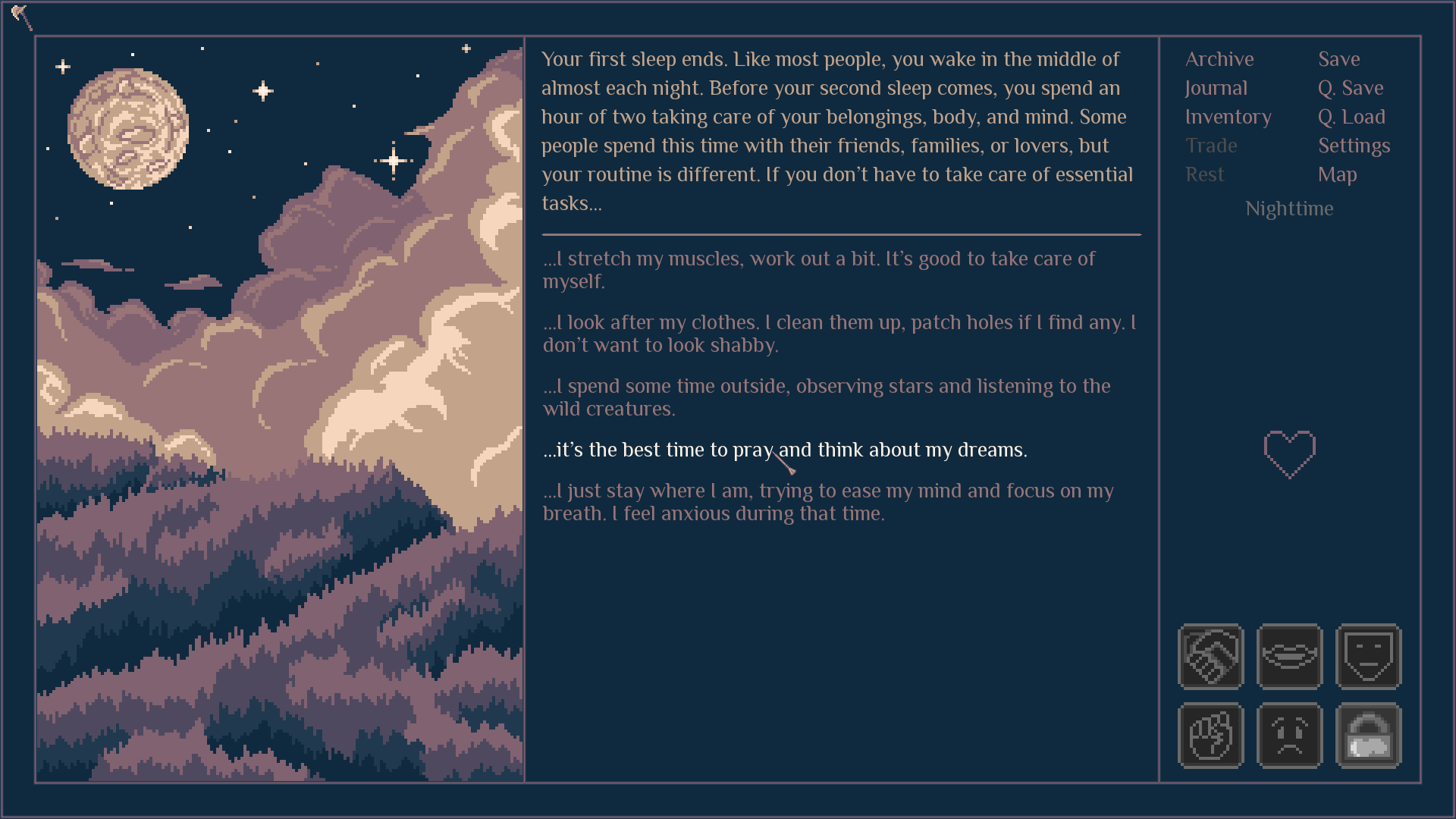 Other scenes involve a bit more stuff to do related to the areas where the player can rest, or quests, or items that the player is carrying in their inventory... All sorts of things. What matters is more things can be now easily added this way. : )

3. The East and the West are now connected

Riding around the entire peninsula is time-consuming, but now the player can take the shortcut connecting two distant spots in the West and the East, saving their time... But also risking some dangerous encounters. 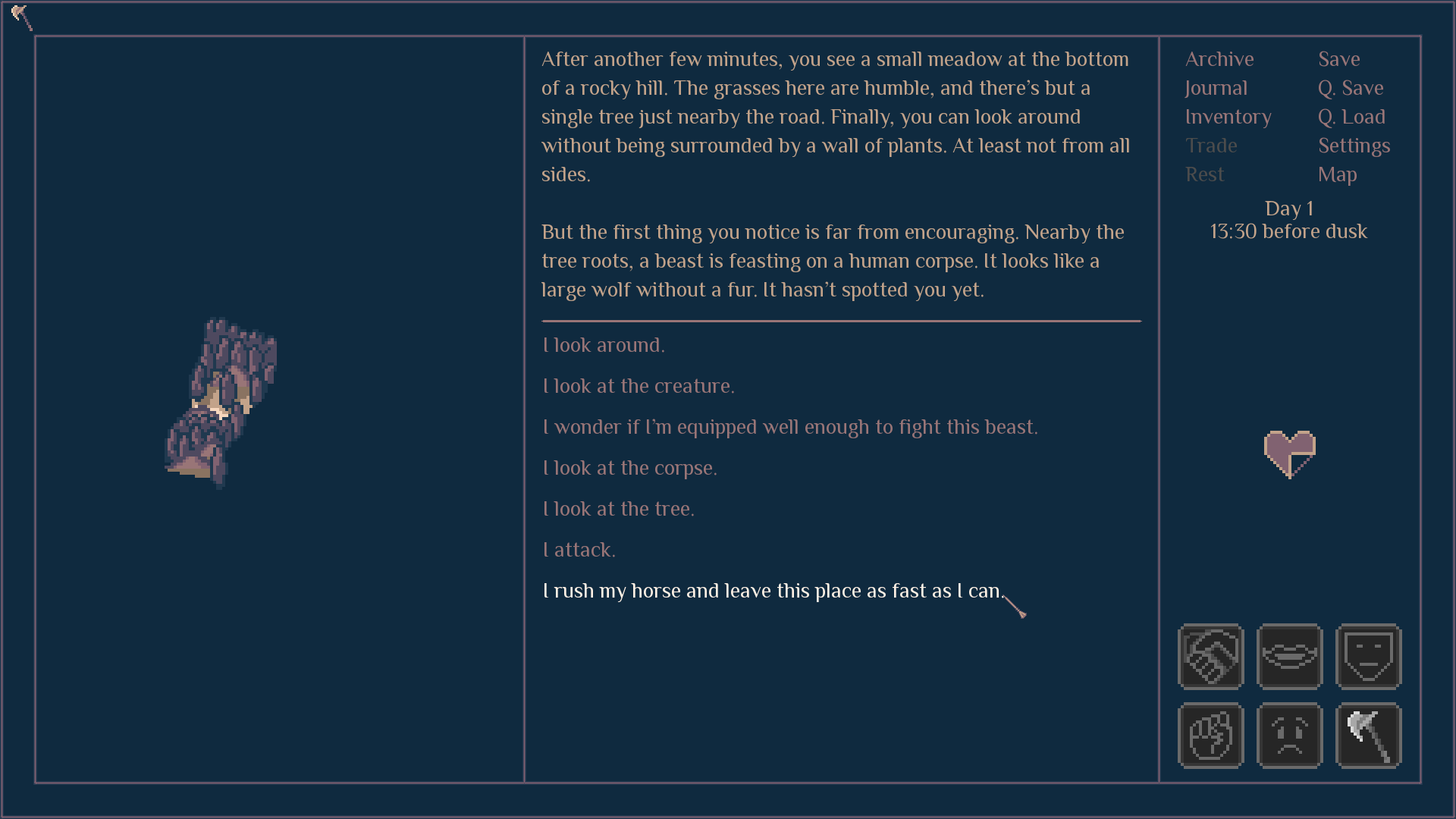 The visuals of this shortcut differ from the rest of the game, but so does its systems and the mood that accompanies it. It’s easy, even very easy to die here, so it’s recommended that only those who are in full strength and have a proper equipment enter this forgotten path. The heart of the forest is a place with some unique interactions and opportunities, sometimes connected to tasks given to you by the NPCs from the peaceful settlements. 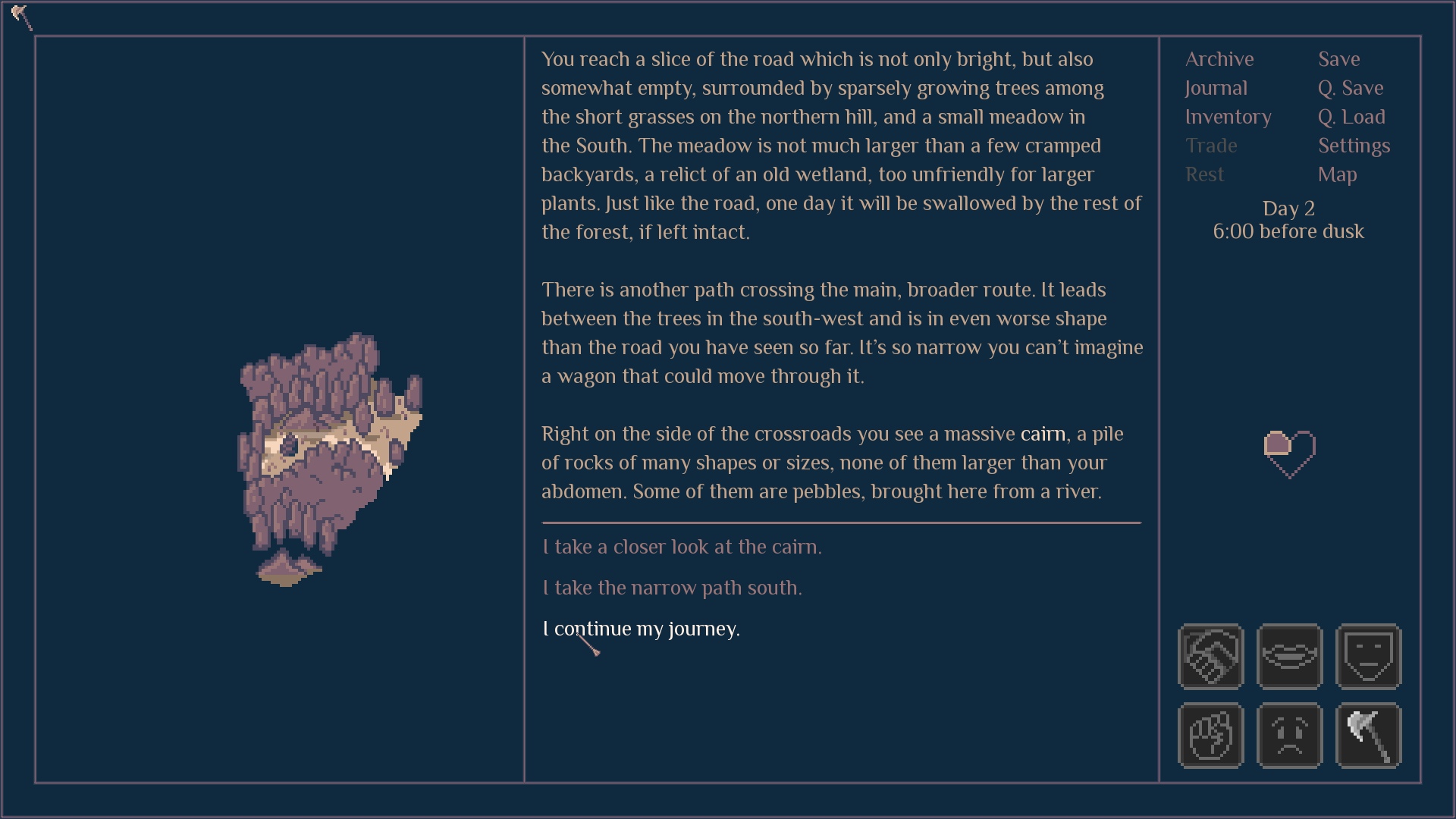 4. More information in the journal 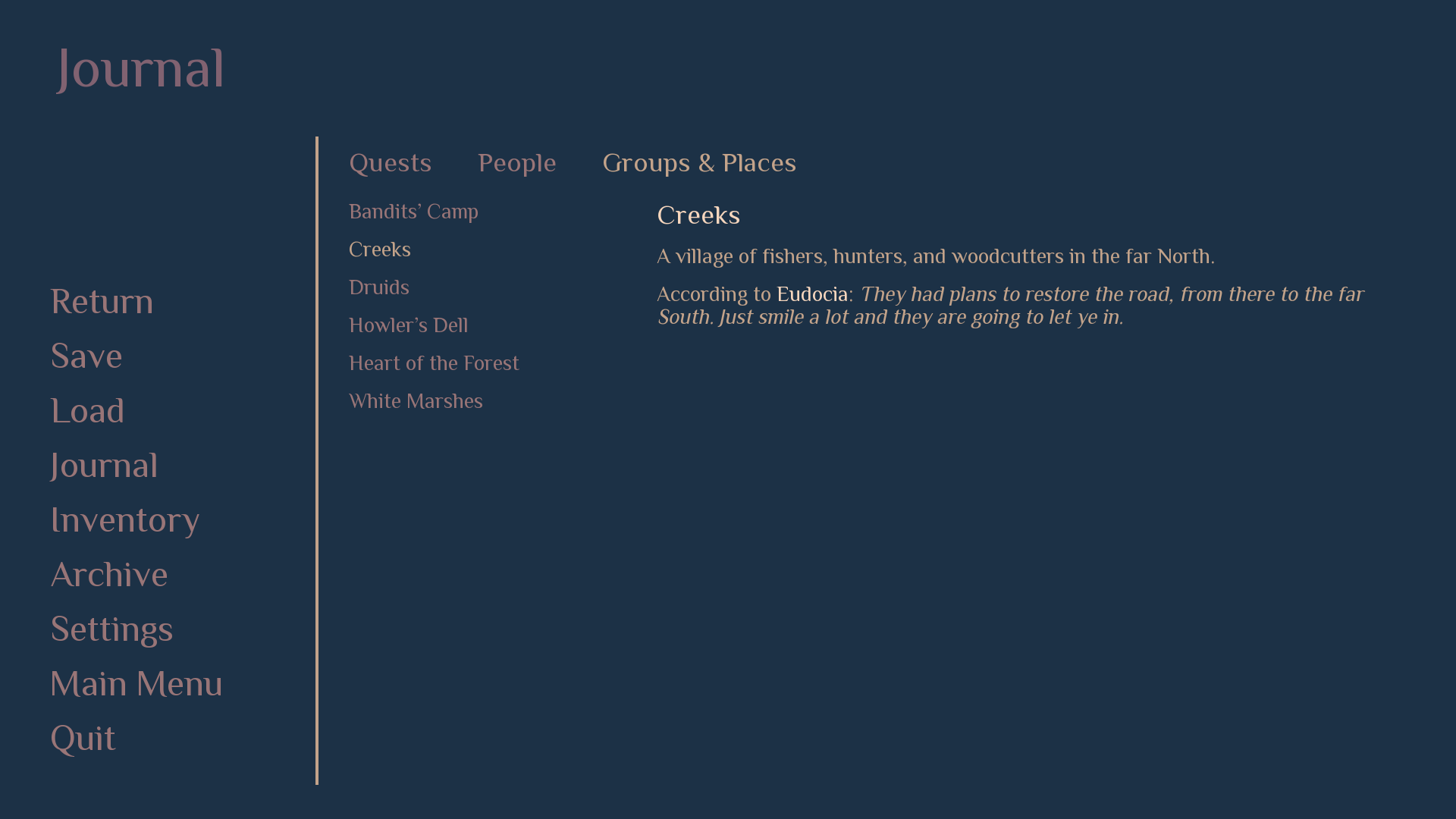 The Groups & Places category contains hints related to various points of interest. Just like the People category, it’s meant to both refresh the player’s memory and provide them with clues related to the game’s story and quests.

5. All sorts of updates

It’s hard to make a list even with the more noticeable ones - there's just too many things going on now. Some of them involve visuals, like the changes made to the world map: 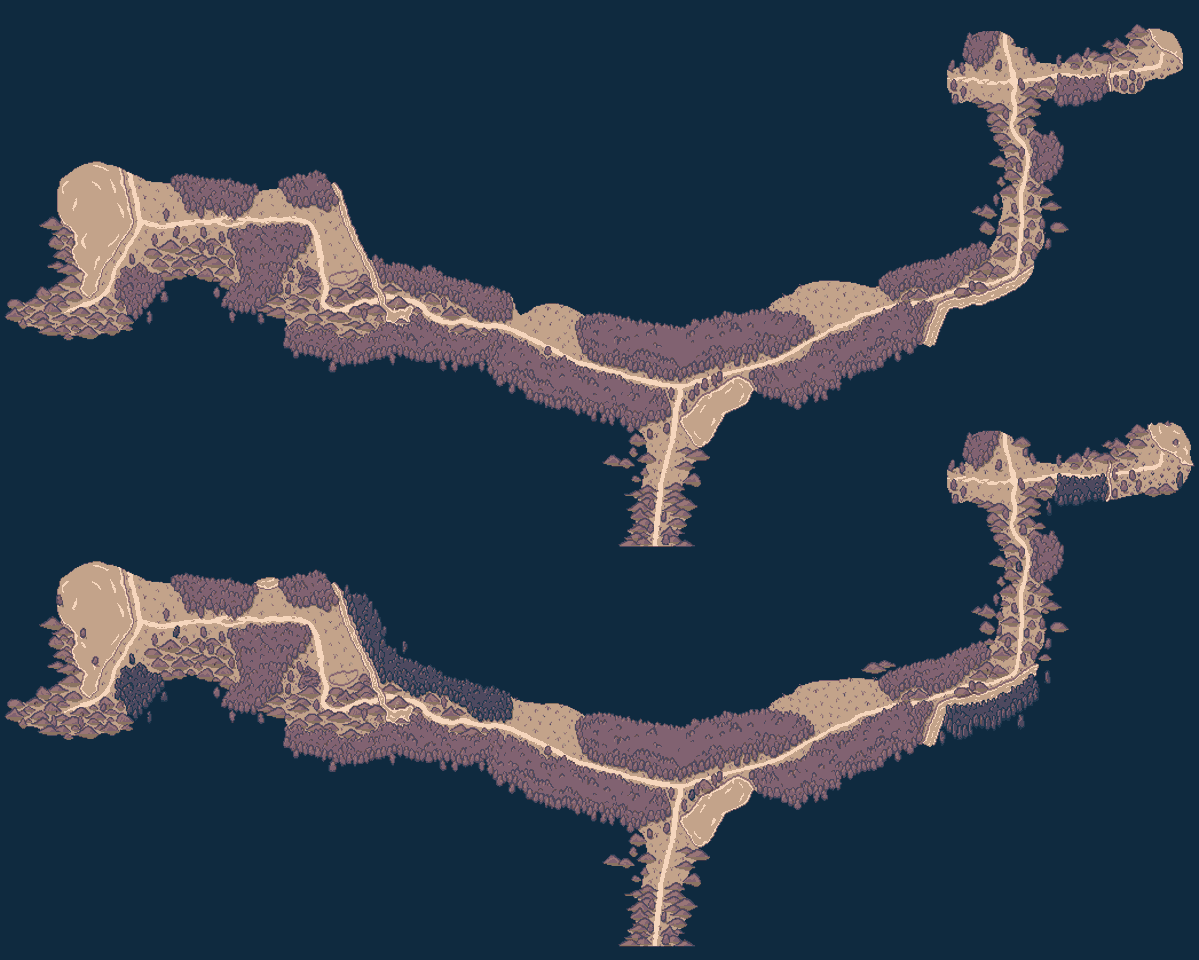 It’s hard to spot the them without zooming in, but they fit the style of the rest of other regions. It’s now more detailed and has more colors to it (believe or not ; )). The entire map is already fully drawn, though I don’t want to spoil the rest before the release. 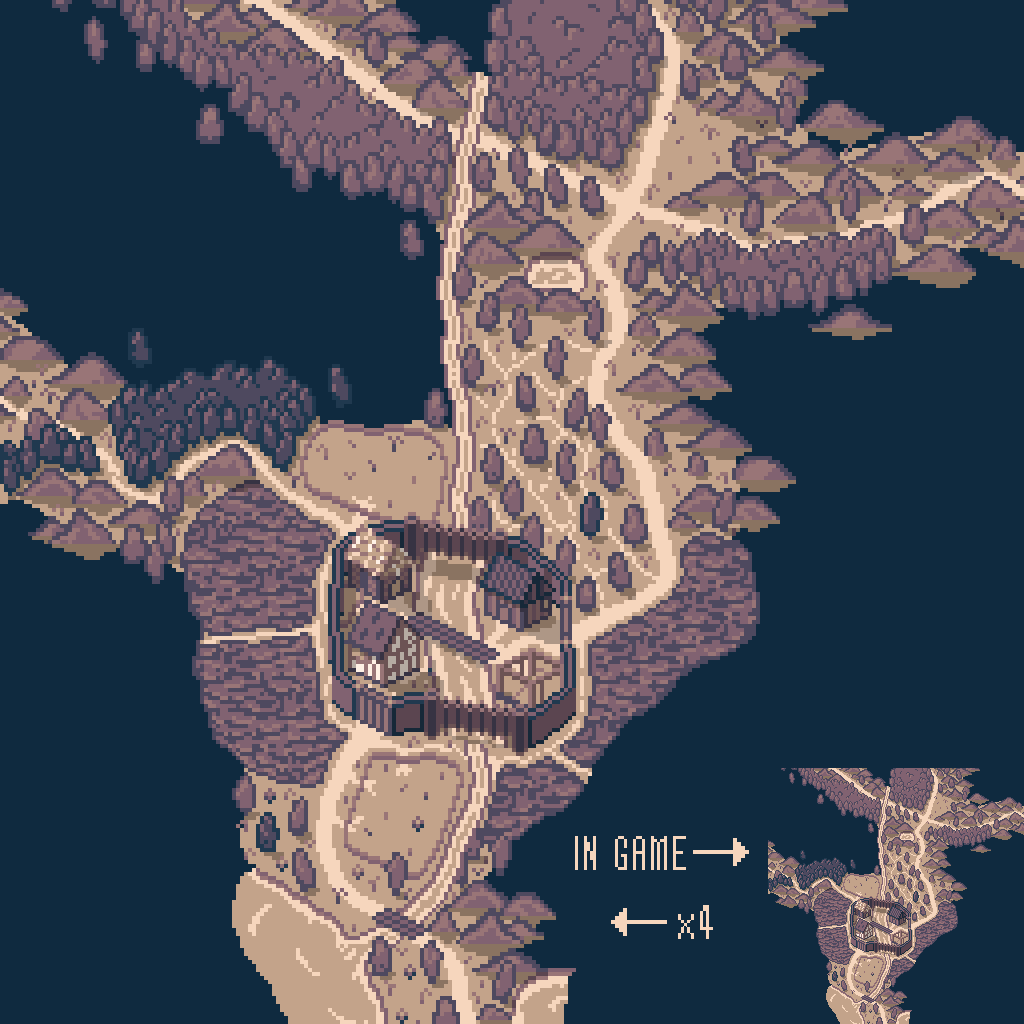 Other updates are related to the language used in the game...

...and the writing in general. While the game is far from being finished, it keeps getting tested by new people, one of whom is now helping with editing and proofreading the game’s dialogue and has helped me improve the tutorial a bit. I can’t promise the text is definitely going to stop sounding “foreign,” but the updates are already promising.

There are also new systems, small and large. For example, the crossbow has been weakened, or rather - it now uses quarrels which also have to be purchased. Just a little thing, but adds a lot. 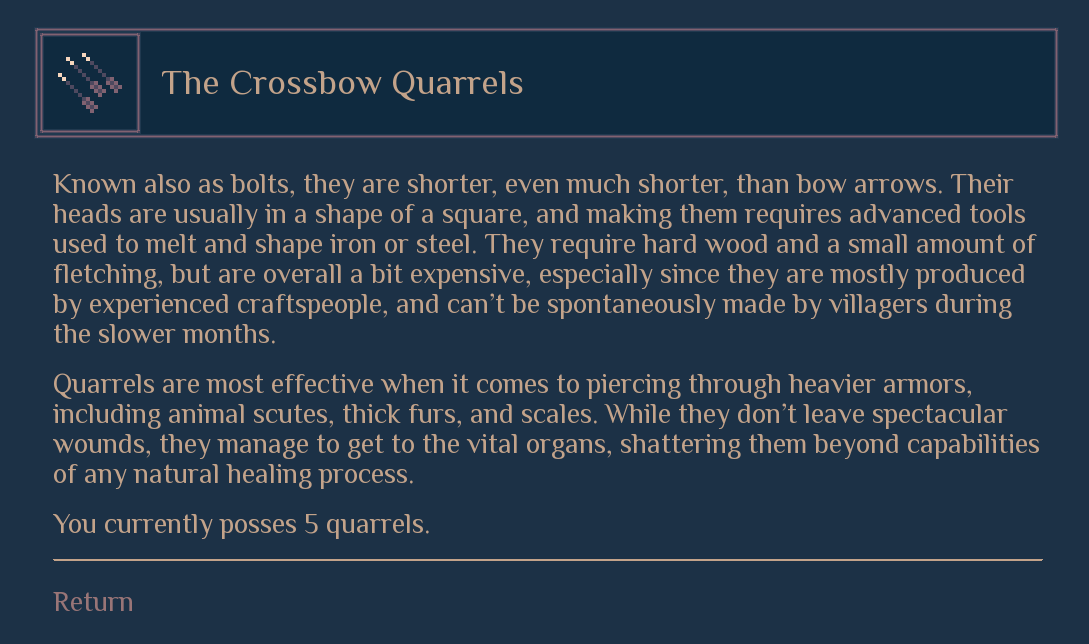 Also, the new alchemy system for the Scholar class is close to being finished. Listing others new systems would get a bit spoiler-y.

Oh, and the “continue” button has been introduced.

The main thing I try to deal with is making the experience more interactive, and not just larger. Writing things for the sake of the pure volume of text wouldn’t serve anyone. Instead, I’ve spent a lot of time adding new things to do in the older areas, filling the gaps and making it feel like the the story is not just presented to the player, but actively changed by them.

Thank you for taking a look at this devlog, for your support and kindness. I’m once again forced to push the game’s release, hopefully just to the first half of 2021. It’s sad to see how slowly the development goes, but that’s what you get when you try to give it all and result in something way too ambitious for your own sake. Let’s hope it’ll turn out to be worth it for you. : )

You can also find me on Twitter and Facebook, and the game has a Steam page on which you can add it to your wishlist. Have a great day! 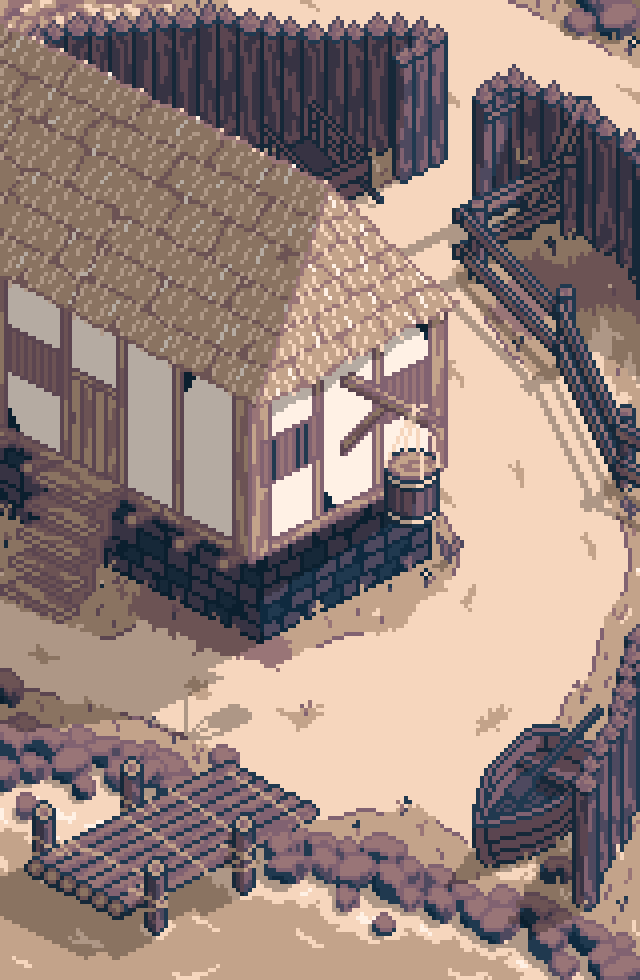 i downloaded the demo a really long time ago, and i havent been on this site for a while, so it's really nice to hear that the game is still going on!! the demo was great btw, so im sure the final game will be even better

Thank you so much! These devlogs are not very popular and I'm really glad when sometimes find them. : ) I believe that with every month the game gets significant updates!

Nice to read from you, thanks for the update, and keep your heads up!