(Roadwarden is an illustrated text-based RPG in which you explore and change a hostile, grim realm. It combines game mechanics of RPGs, adventure games, and Visual Novels!)

Greetings, travelers! The game’s development goes smoothly, especially content-wise. Since the last devlog I added 5 large settlements, more than doubling the previous amount, and it’s a delight to see how the areas and quests on my task lists get marked as “finished”. 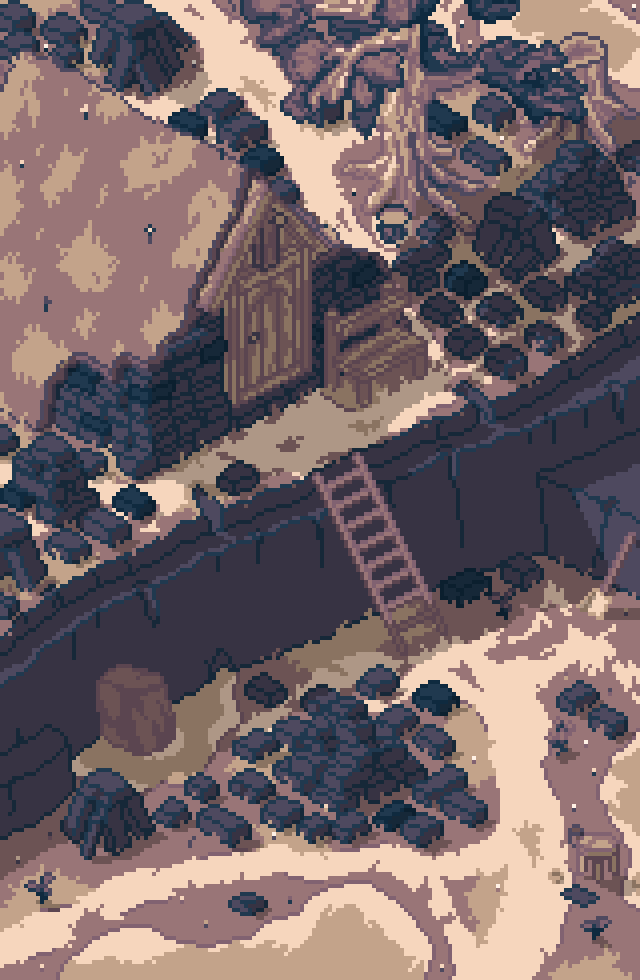 The break from social media has been a relief. Spending less time on maintaining an online presence took a huge weight off my shoulders, allowing me to focus on what’s going to matter the most to the players. I hope you can forgive me for keeping a few surprises until the game’s release, and for now here are some highlights! : )

The shops are now denser, using fewer buttons and having an option to display more items at once: 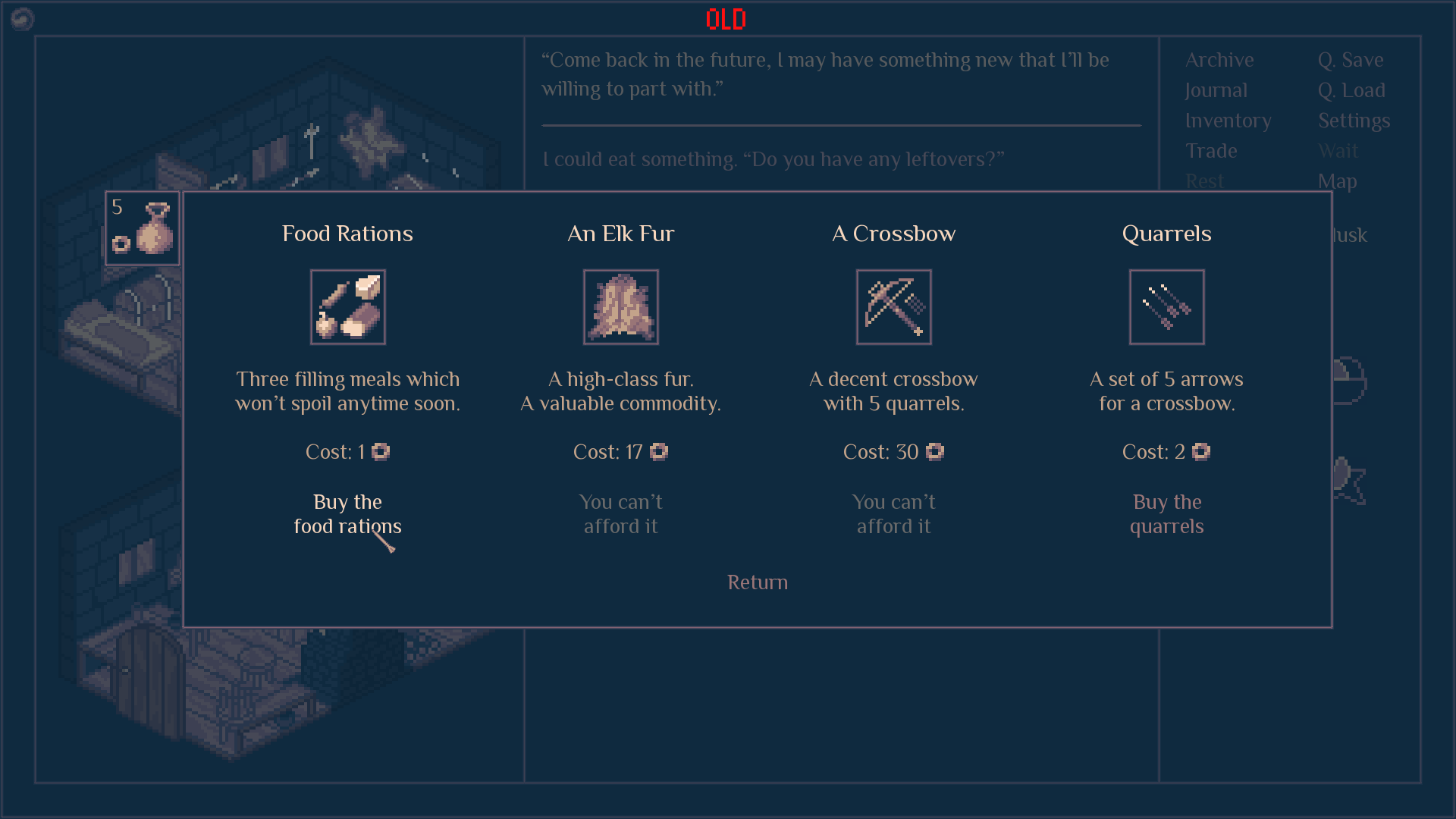 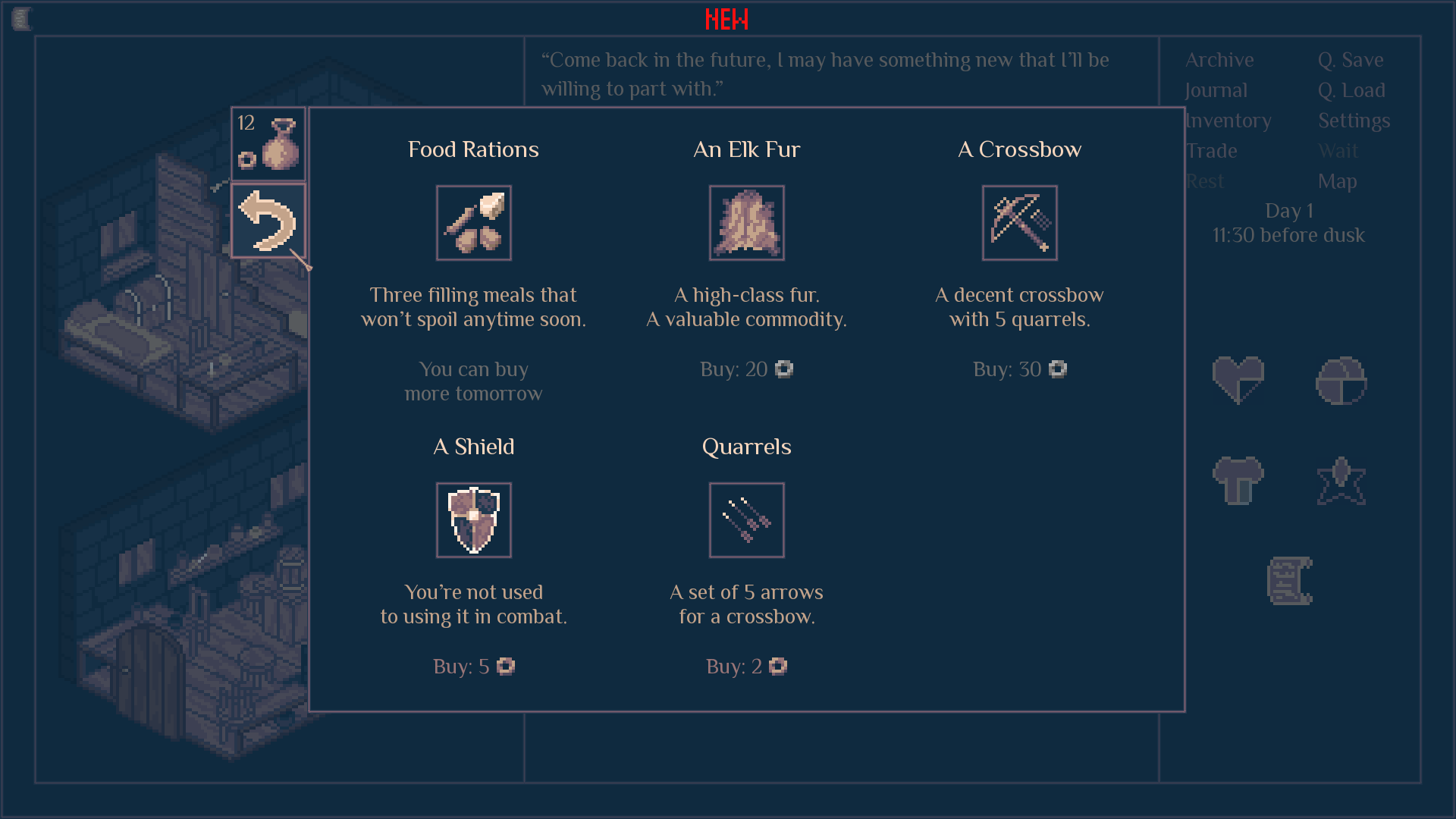 The sleeping / resting spots no longer require any memorizing or guessing on the player’s side, instead explaining directly how they will affect the character stats: 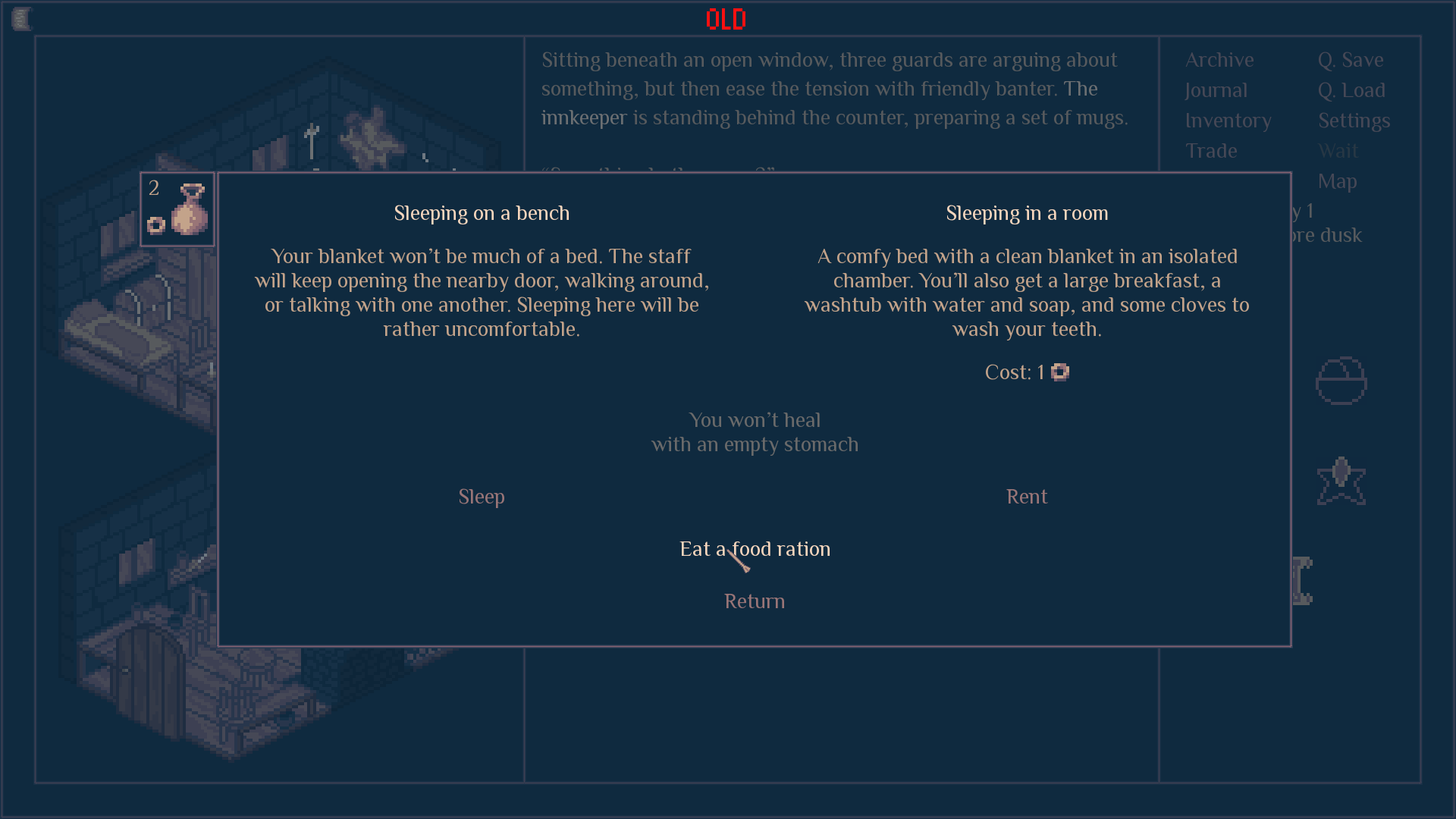 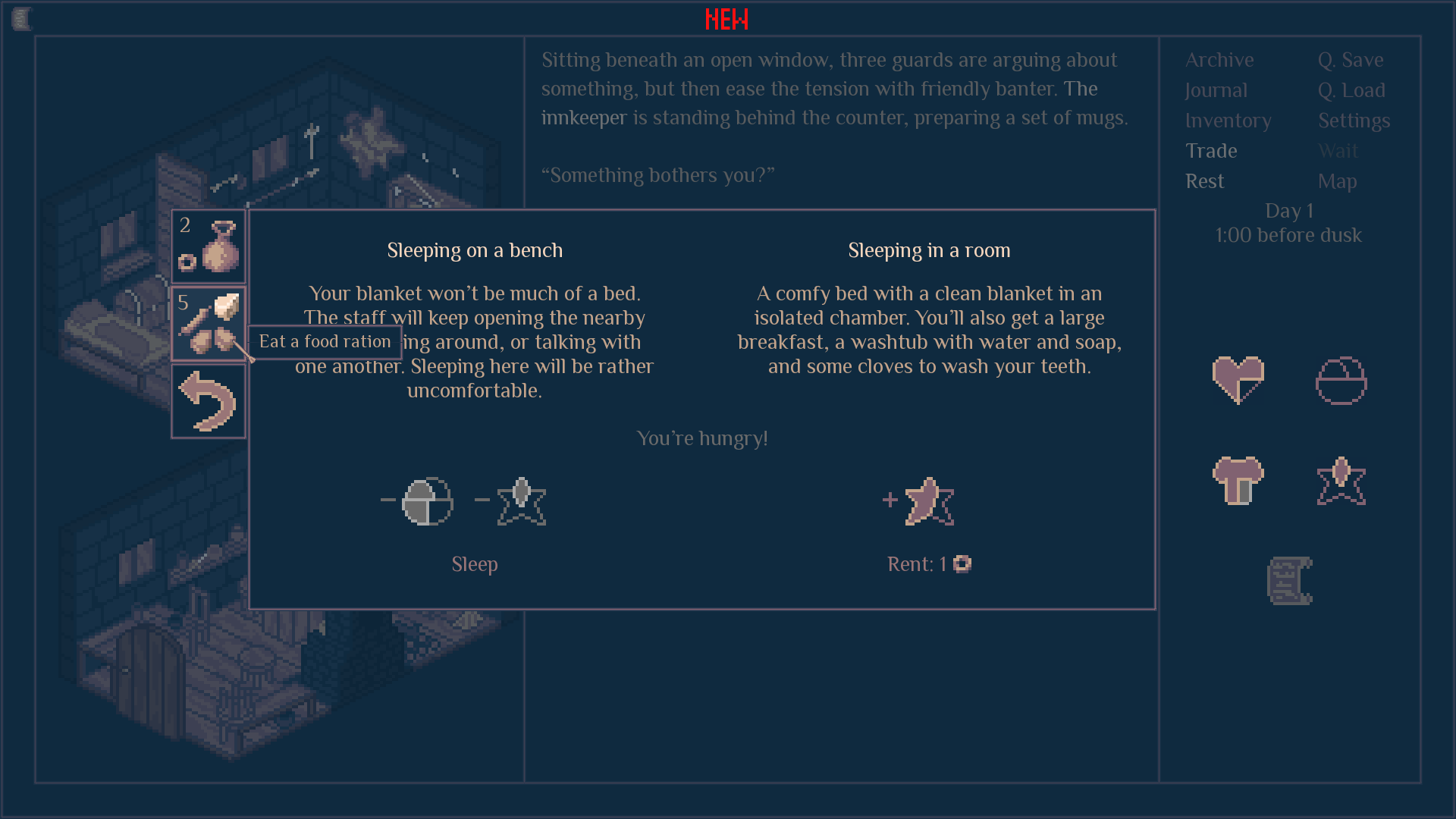 What also affected the healing ritual for mages: 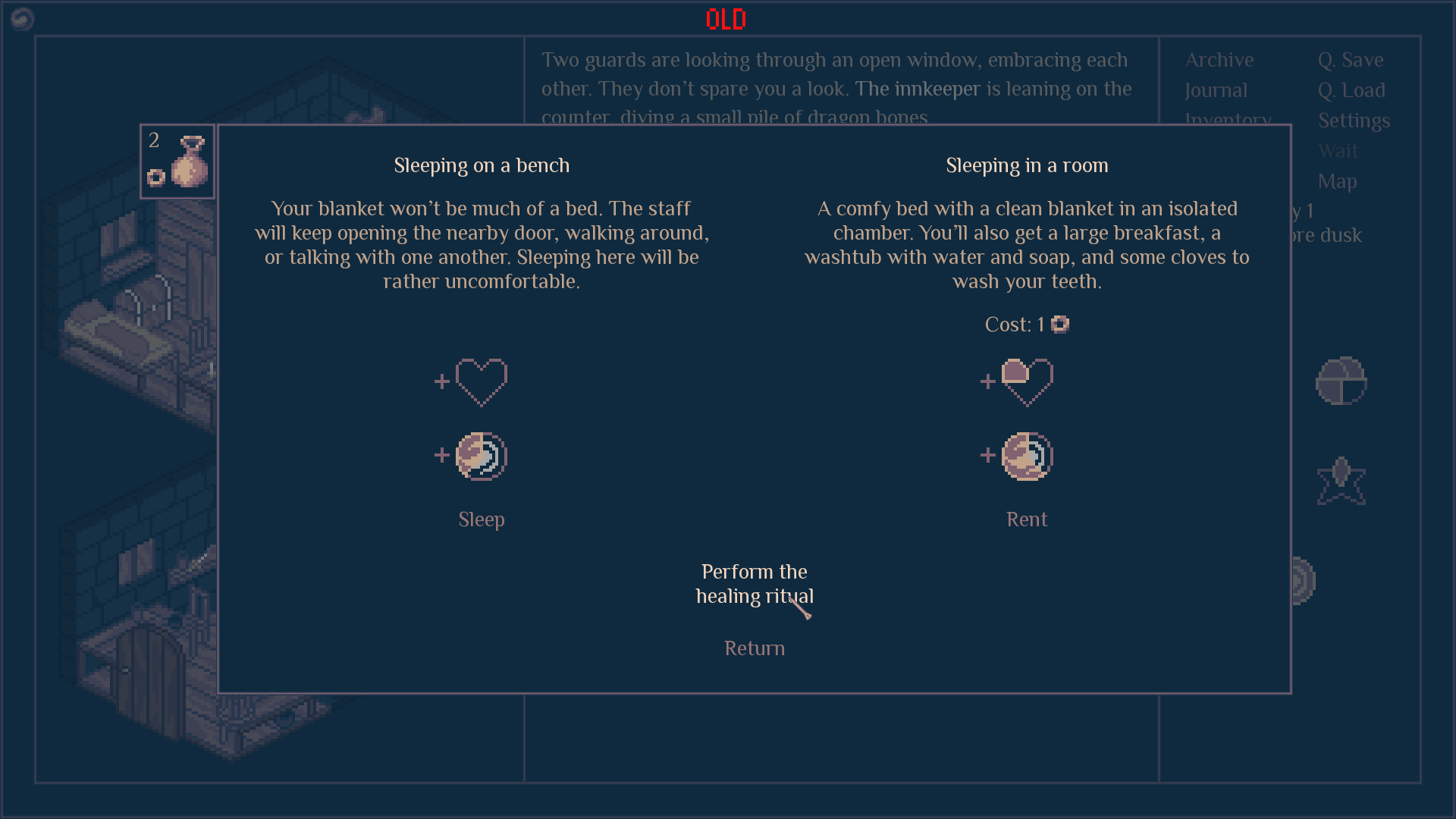 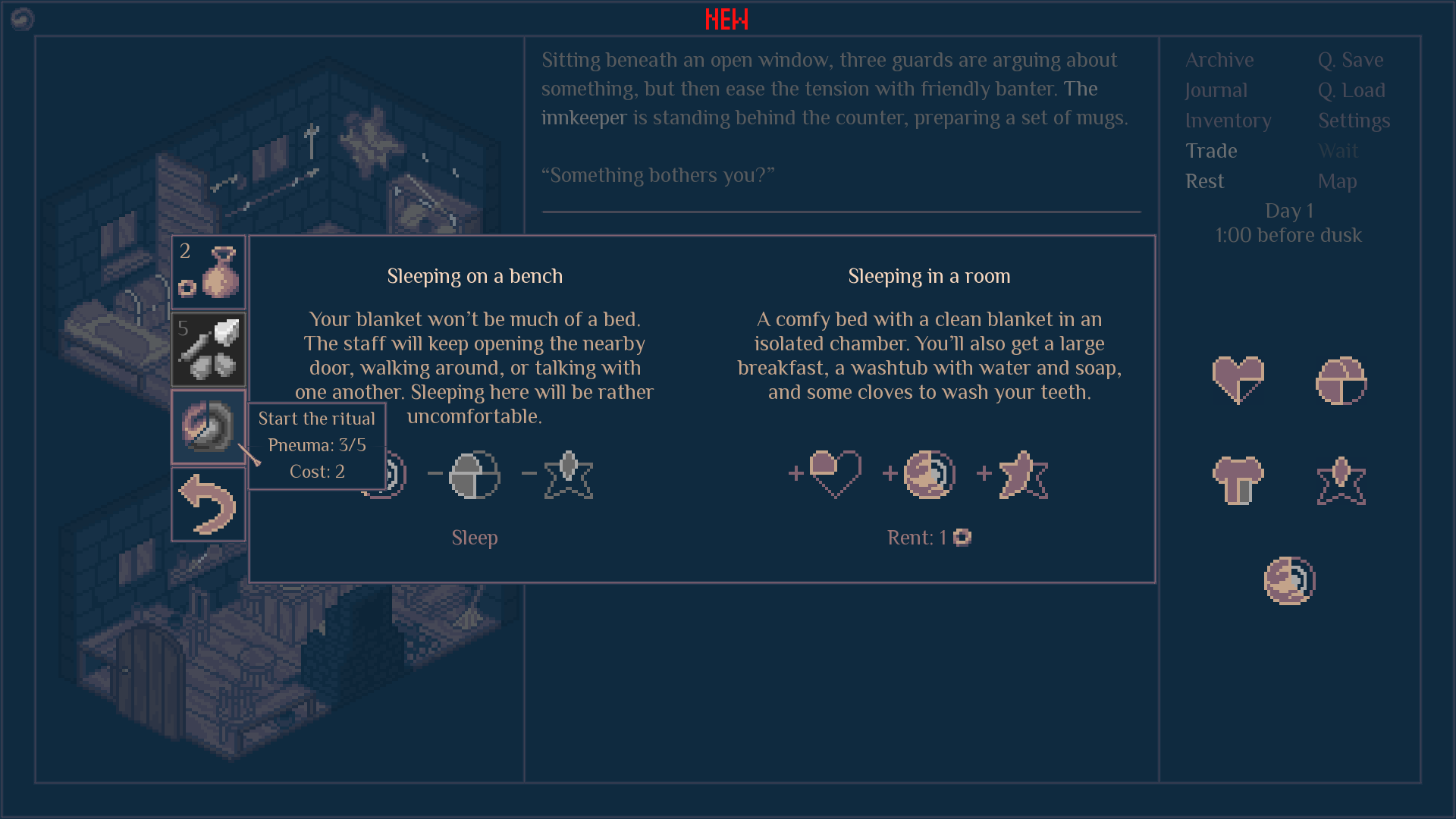 Also, the game no longer marks the “distanced” Attitude as the default option during conversations. The player has more freedom in looking at the options they find any interest in, without being pushed to seeing one of them as “the regular one”.

Due to popular demand, the game now highlights the Trade / Rest (Seek shelter) / Travel buttons to make it clear the player isn’t “stuck” in a conversation or interaction. 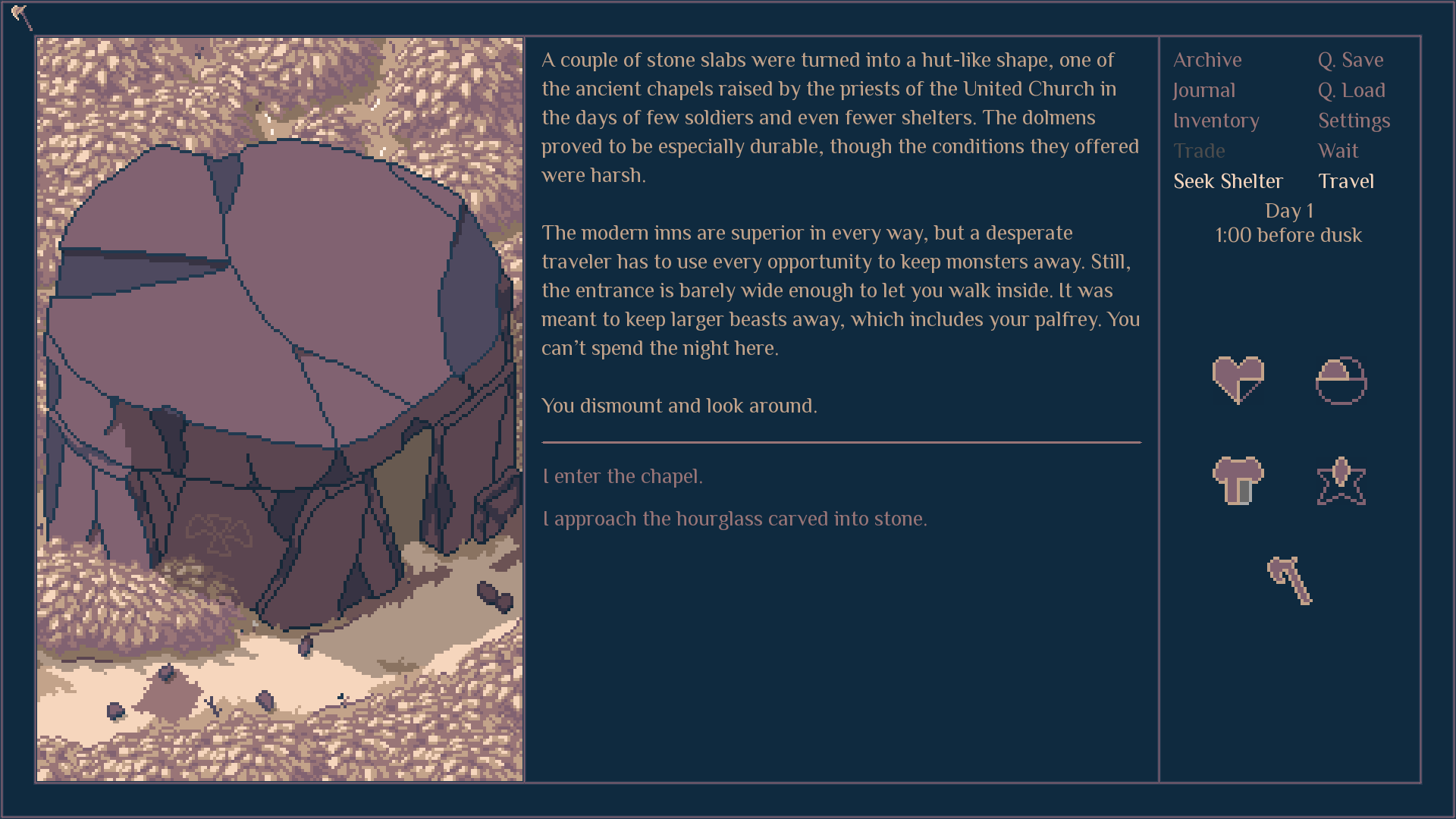 And while there’s much more, let’s end with this tiny adjustment:

As the game gets more complex, it requires better tools to explain its rules, especially to the players who take longer breaks between play sessions. The character sheet allows the player to learn the rules in greater detail while also keeping track of various actions. 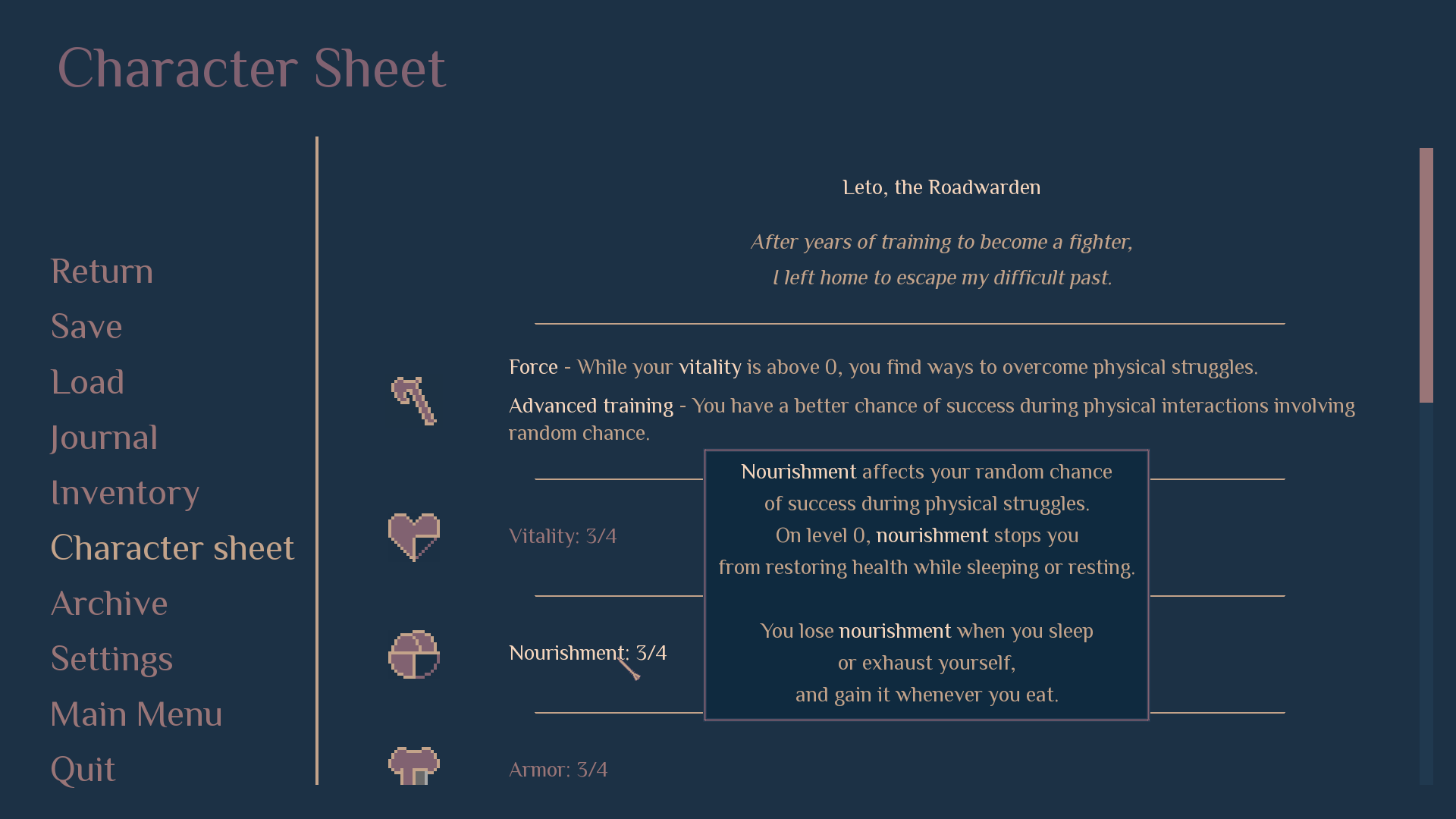 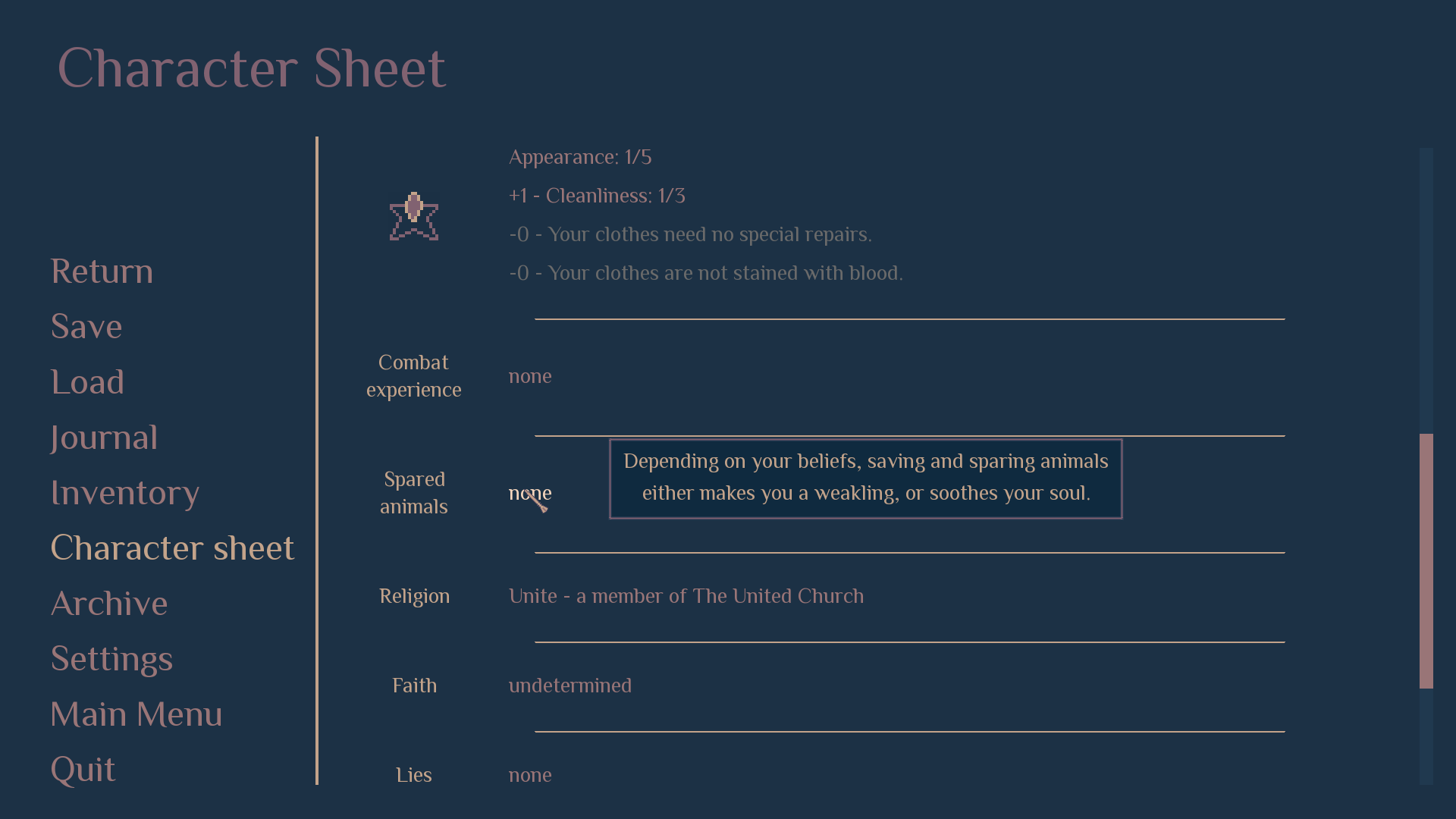 Thanks to the new icons, it’s easier to keep track of various services and opportunities. Unlocking new options and areas adds more icons to the key, so getting used to them takes little effort. 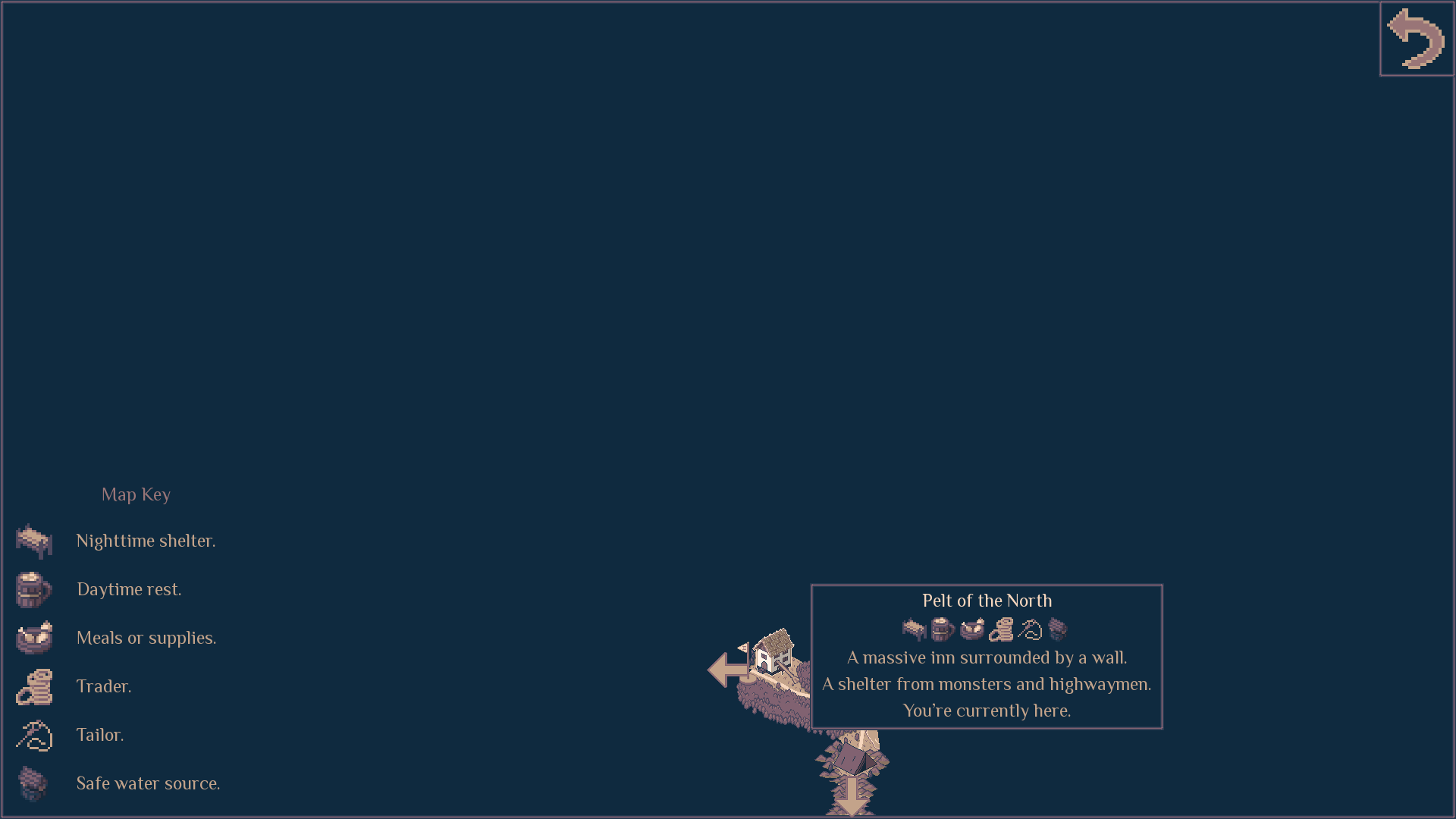 Speaking of icons - how about a glimpse of the current item set from the game? 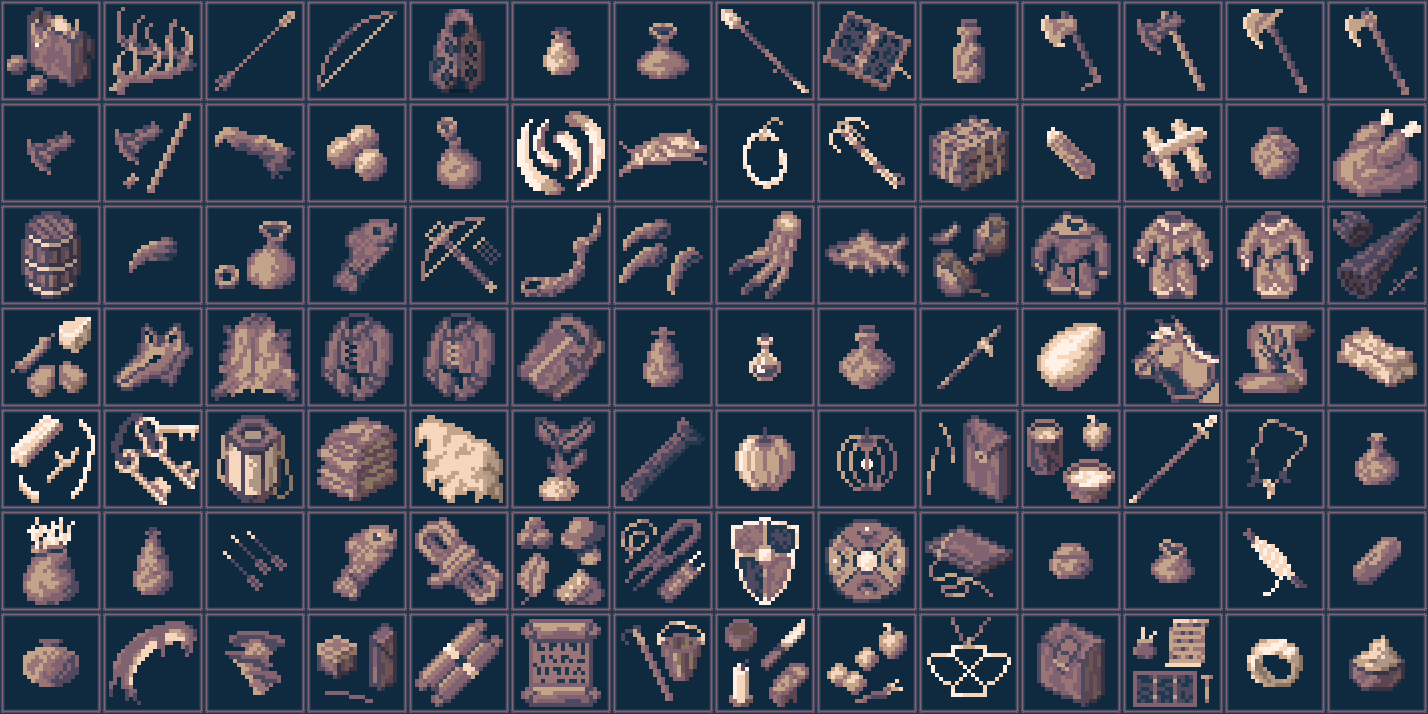 I recently redrew about 1/3 of them. To those who’ve been following the game since its oldest demo I offer this humble reminder how things used to look like a few years back: 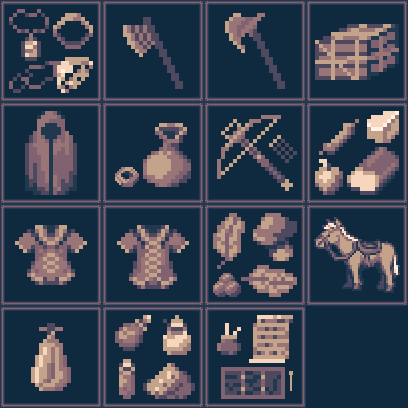 To some encounters, mostly the combat scenes that are not a result of an ambush, I added an option to use the healing potions mid-action. The game keeps track of the possessed potions and reminds the player about them if it sees the PC is currently hurt. 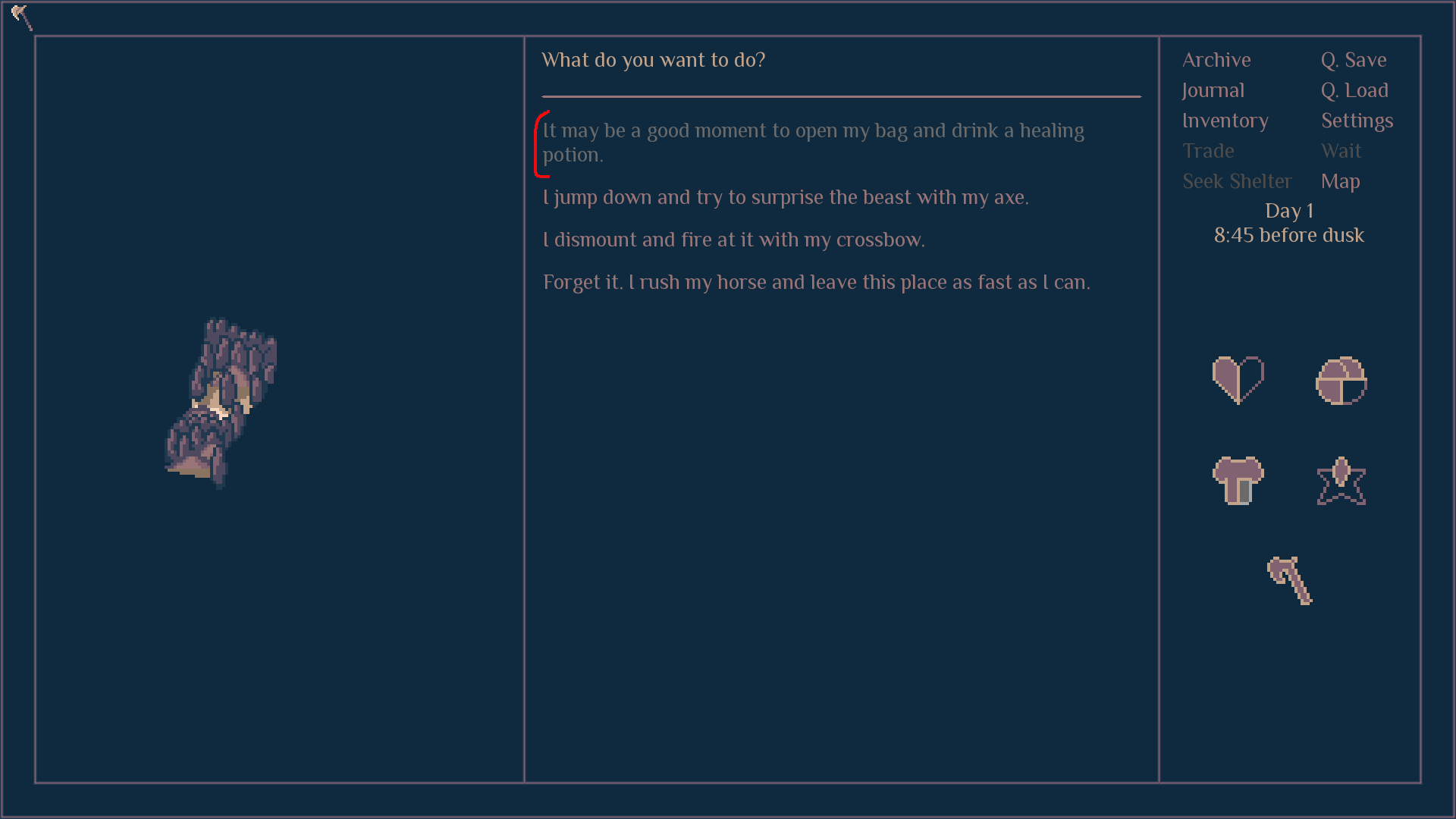 I added a classic lore-explaining glossary to the journal. This way, the player can quickly learn about the setting if they feel lost in their journey. After all, it can be difficult to introduce all this information organically in an RPG with this amount of freedom. 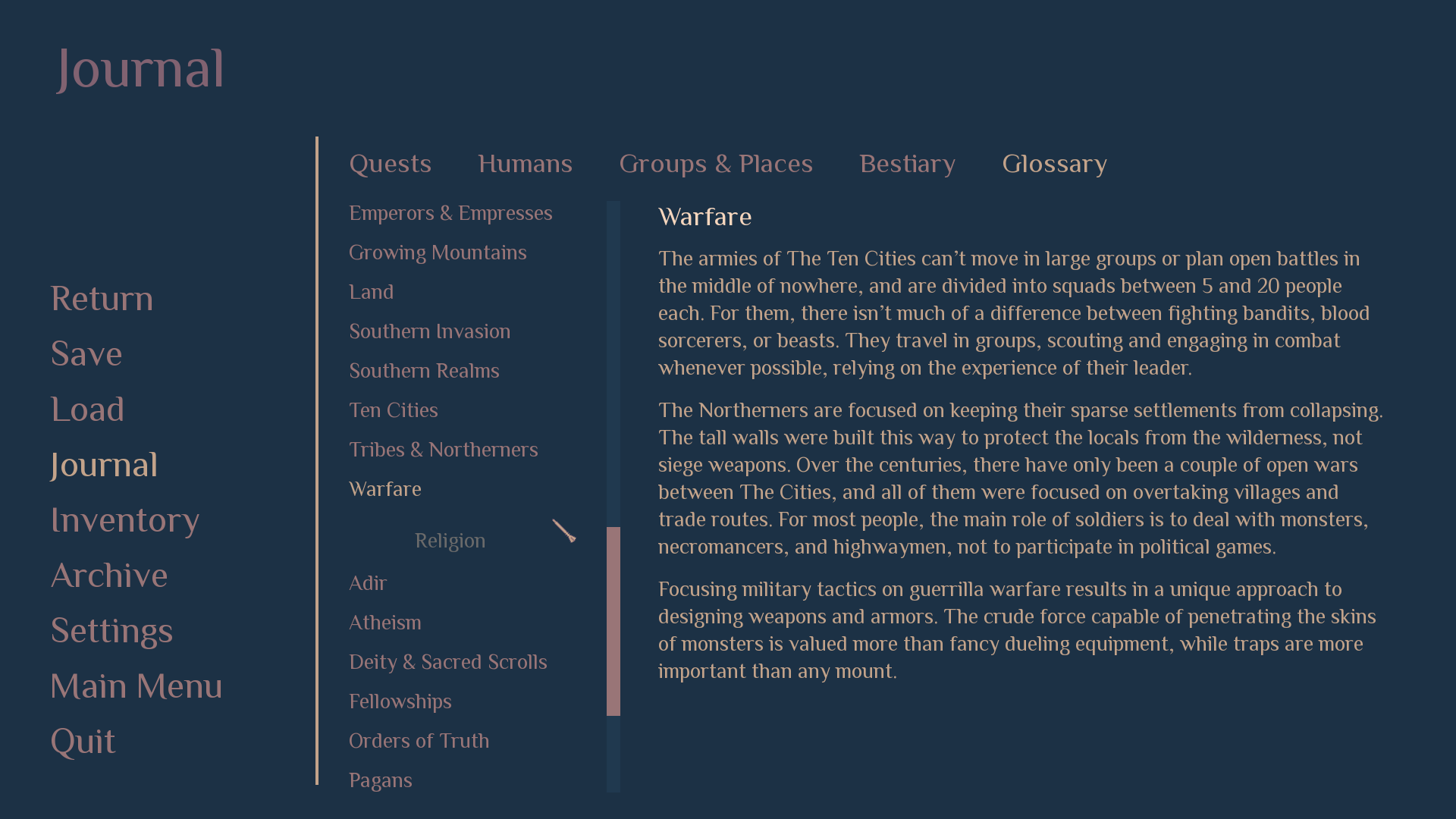 As the game grows, I find more ways to make its rules transparent and the events easier to follow. I still have to redesign the quest journal and I hope to simplify some of the rules after I thoroughly test the game in its entirety, but I believe that Roadwarden successfully adapts to its new environment. : )

Thank you for taking a look at this devlog, for your support and kindness! I hope you’ll agree the changes are promising, and that they explain why the work takes me so long! 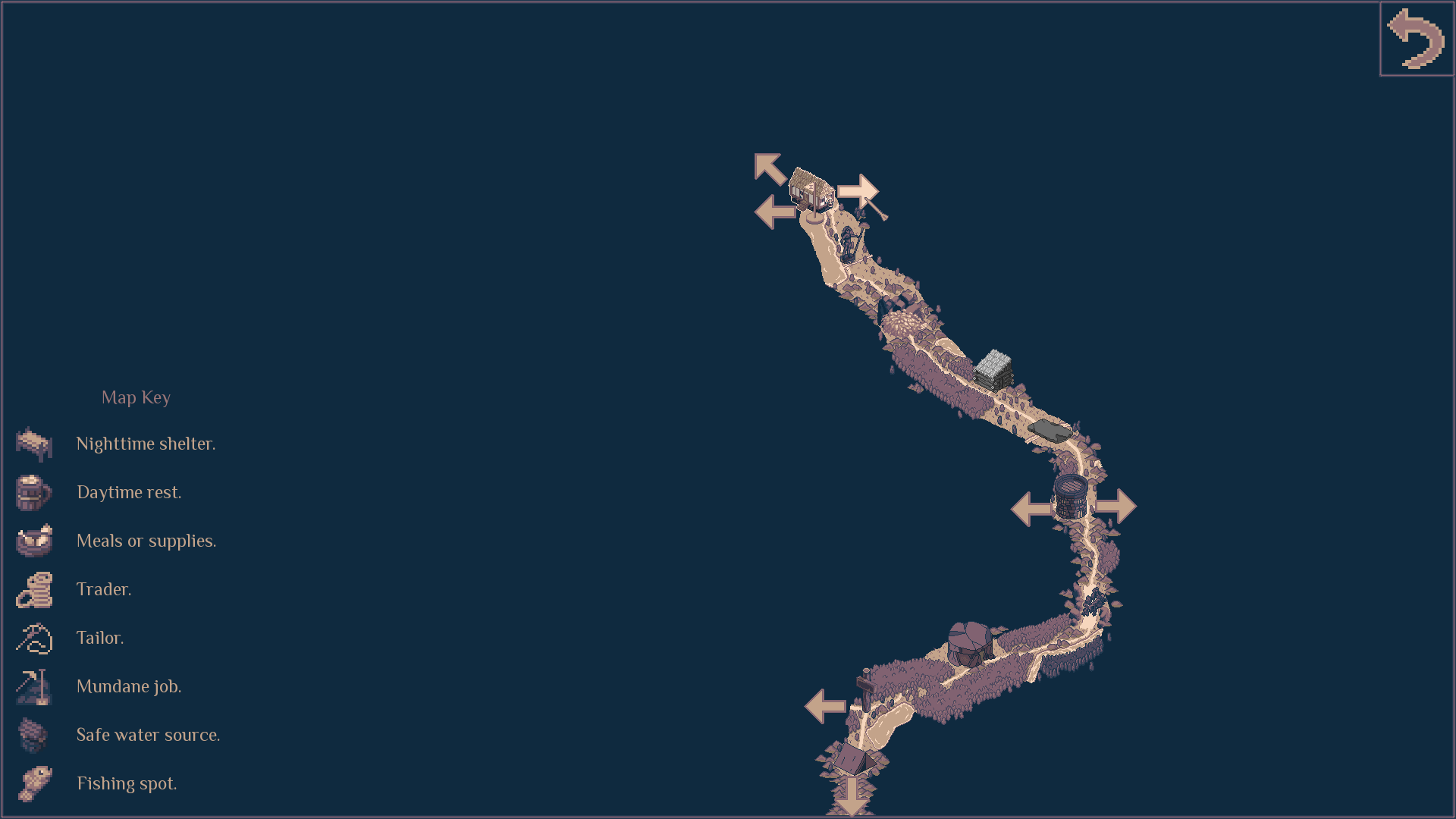 Looks better and better every few months when I check back, and it never looked bad to begin with. Great stuff. Hope you're still remembering to enjoy what you're doing along the way - it should be hard work but not a job, and no-one is 'owed' any time you don't feel like spending on it :)

Lovely thoughts, thank you. : ) Pm some days it does feel overwhelming and I'm getting pulled closer to burning out, but seeing how little work I have ahead of me (when compared to how much I already built) motivates me quite a lot.

Thanks for the devlog! Always great to hear about the development of this game.

Thank you for checking it out! <3

I've had an eye on this game for a while. Looking forward to playing it when its released!

Thank you for sticking around! : ))

i love seeing this game evolve from devlog to devlog!

Thank you for your encouragement! There are many changes that would be difficult to explain or are not flashy enough to turn them into a post, but I do feel like I'm addressing all the major issues with the game, one step at a time. : )

Looks great! I think about this game often and am looking forward to playing it :)

<3 My last few months have been very fruitful! The autumn release starts to look like a realistic option.