Now, here’s quite a jump forward — Roadwarden will be out on September 8th, 2022!

It’s an illustrated text-based RPG in which you explore and change a hostile, grim realm. Roadwarden has been in development for almost 4 years now, and we’re on the final stretch! 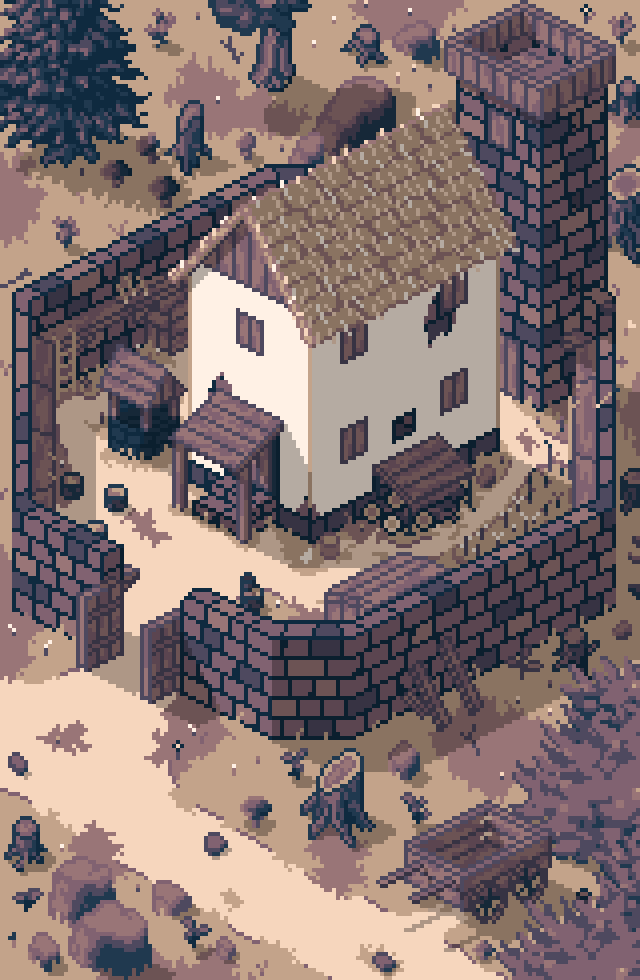 The last few months were all about tying up the loose ends and hunting for bugs — but there are still a few new features to talk about! 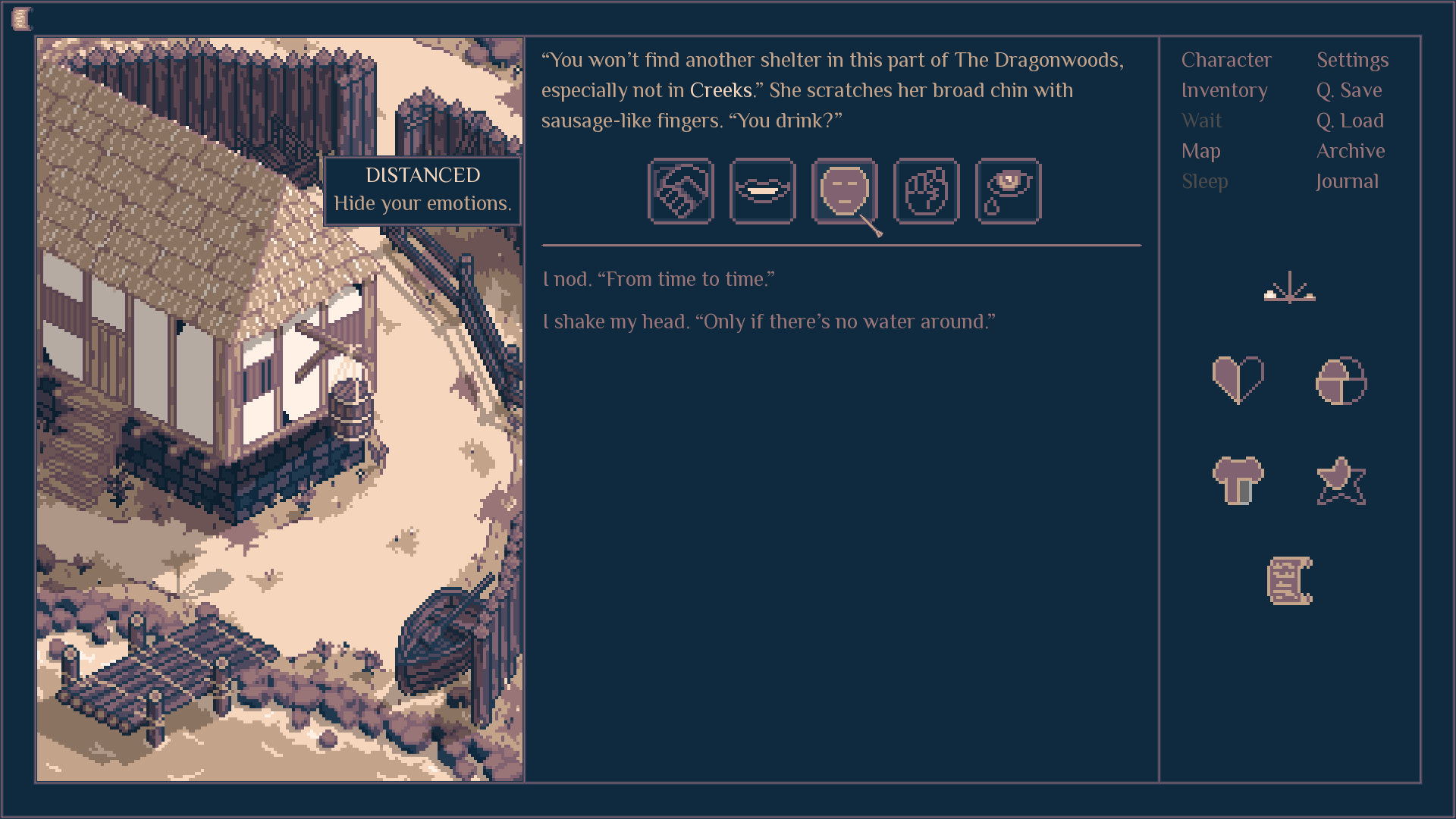 The time limit is the most restrictive system in Roadwarden. Given enough time, the player can heal their wounds, earn coins to buy useful equipment, or gain trust of the locals. However, some of the quests are time-sensitive and players who repeatedly fail at preparing themselves for exploration and combat may reach the game’s epilogue without completing some of the major storylines. 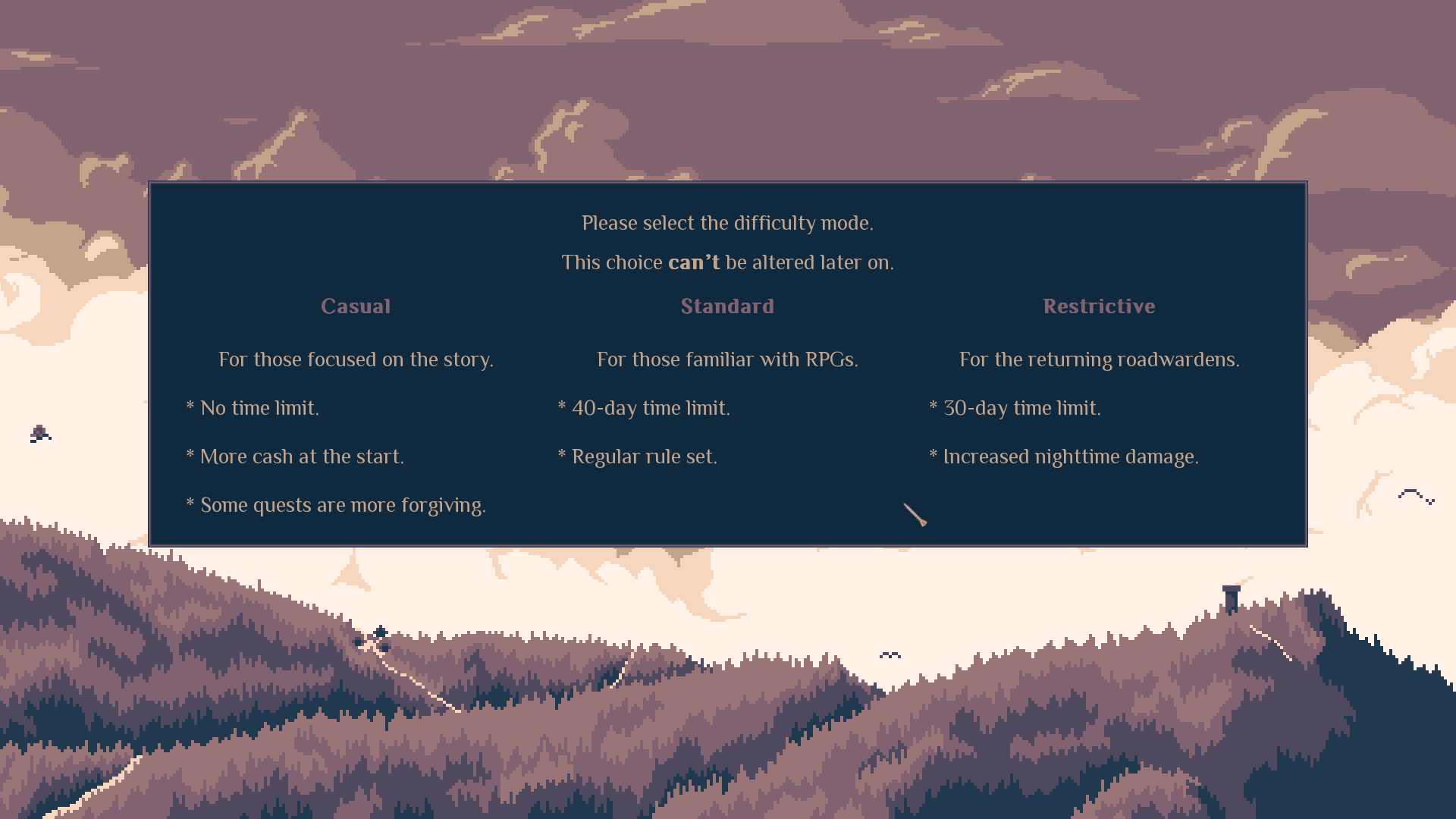 While it’s possible to complete all of the major quests in less than 25 in-game days, most newcomers will struggle to efficiently optimize the Roadwarden’s systems. Adding an “easy mode” for players who are not used to RPGs (or video games in general) and the “hard mode” for returning players is meant to open the game up to a variety of expectations and playstyles. 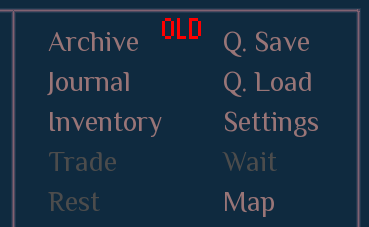 After many months of being untouched, the buttons in the top-right corner are not only reshuffled…

…but I also replaced the Trade button with a quick access to the Character Sheet. 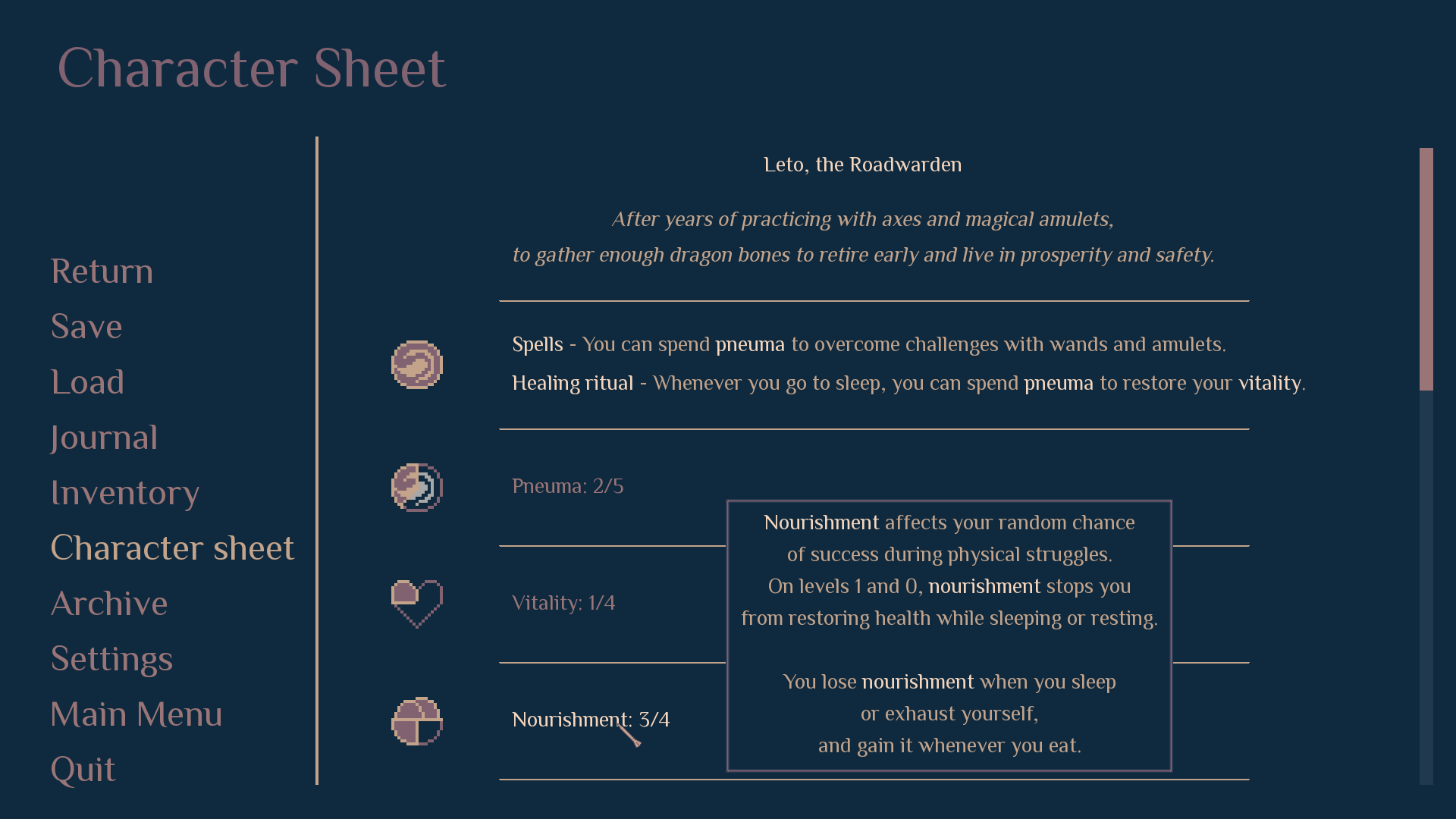 When tested, it turned out that it’s a bit too easy to omit the Trade option while talking with various NPCs. From now on, the trading is available through the dialogue options, always staying in the player’s field of view: 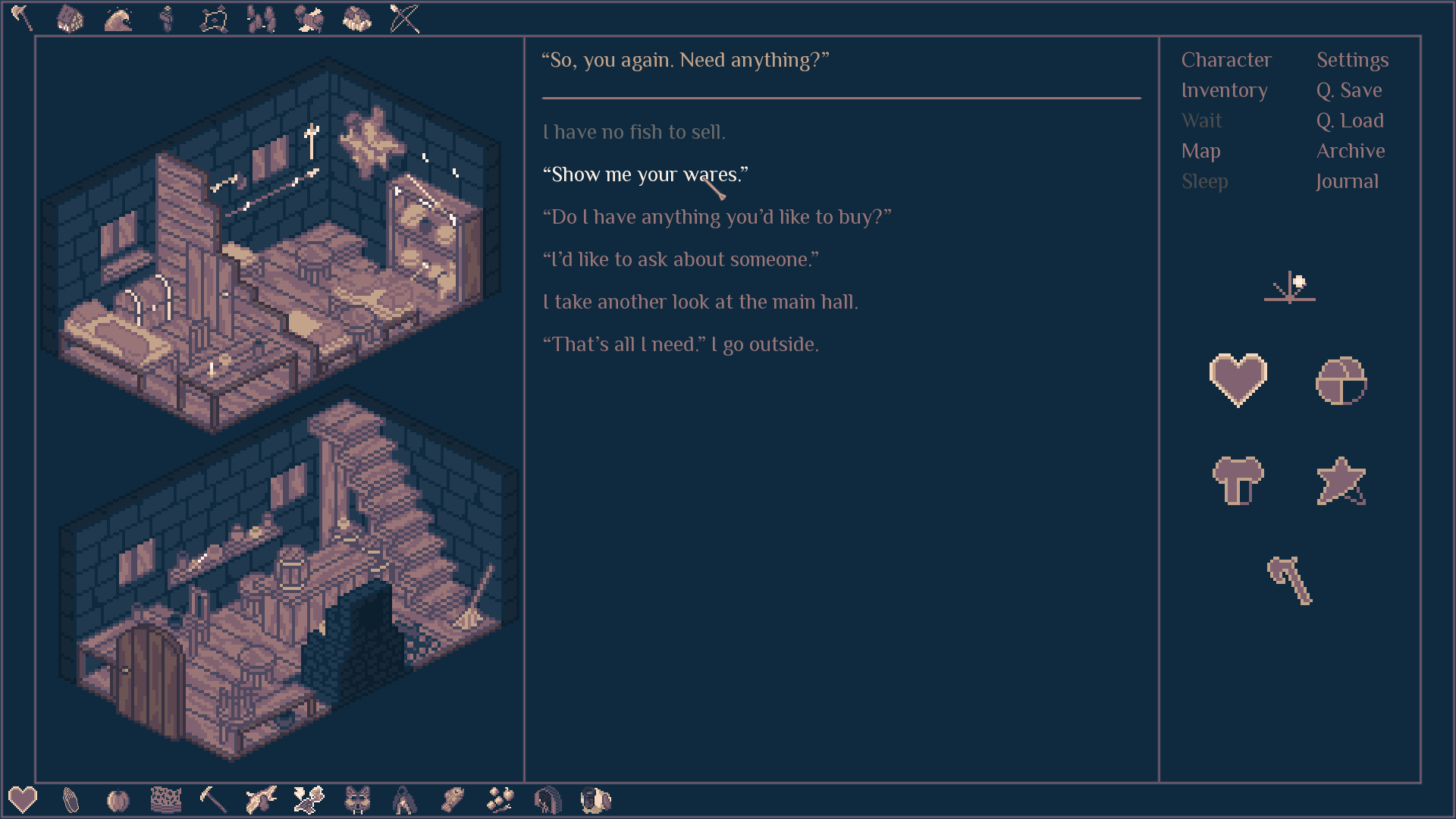 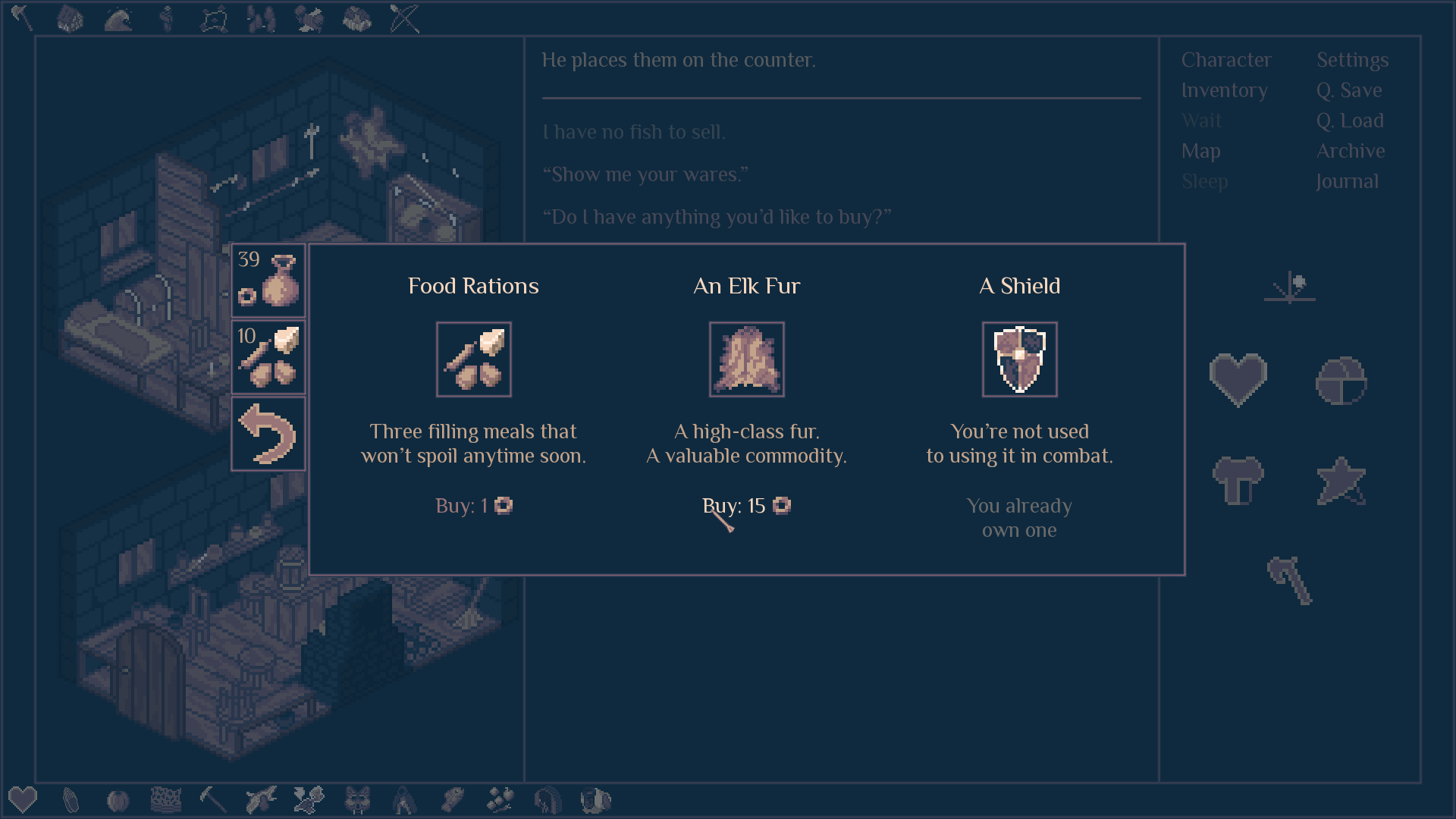 This annoying line of code has crashed the game more times than I can count.

Here you can see how it should look like:

The reason why it destroyed me is that the game didn’t break when this bit of text was loaded. Instead, it could lurkin the shadows for minutes, until it appeared in a completely different area or conversation. I spent many hours tracking down the source, especially after it crashed the game of one of the demo players.

“Is it a memory leak? Is the game simply falling apart after some time? Am I going crazy?”

And all sorts of tiny, yet important details

And what is this just below the quick menu? Is this the new, fancy clock?

It’s less distracting and offers more information at once whenever pointed at, with fewer space restrictions.

The item list in the inventory is now more flexible. In the early stages of the game, it remains small, but… 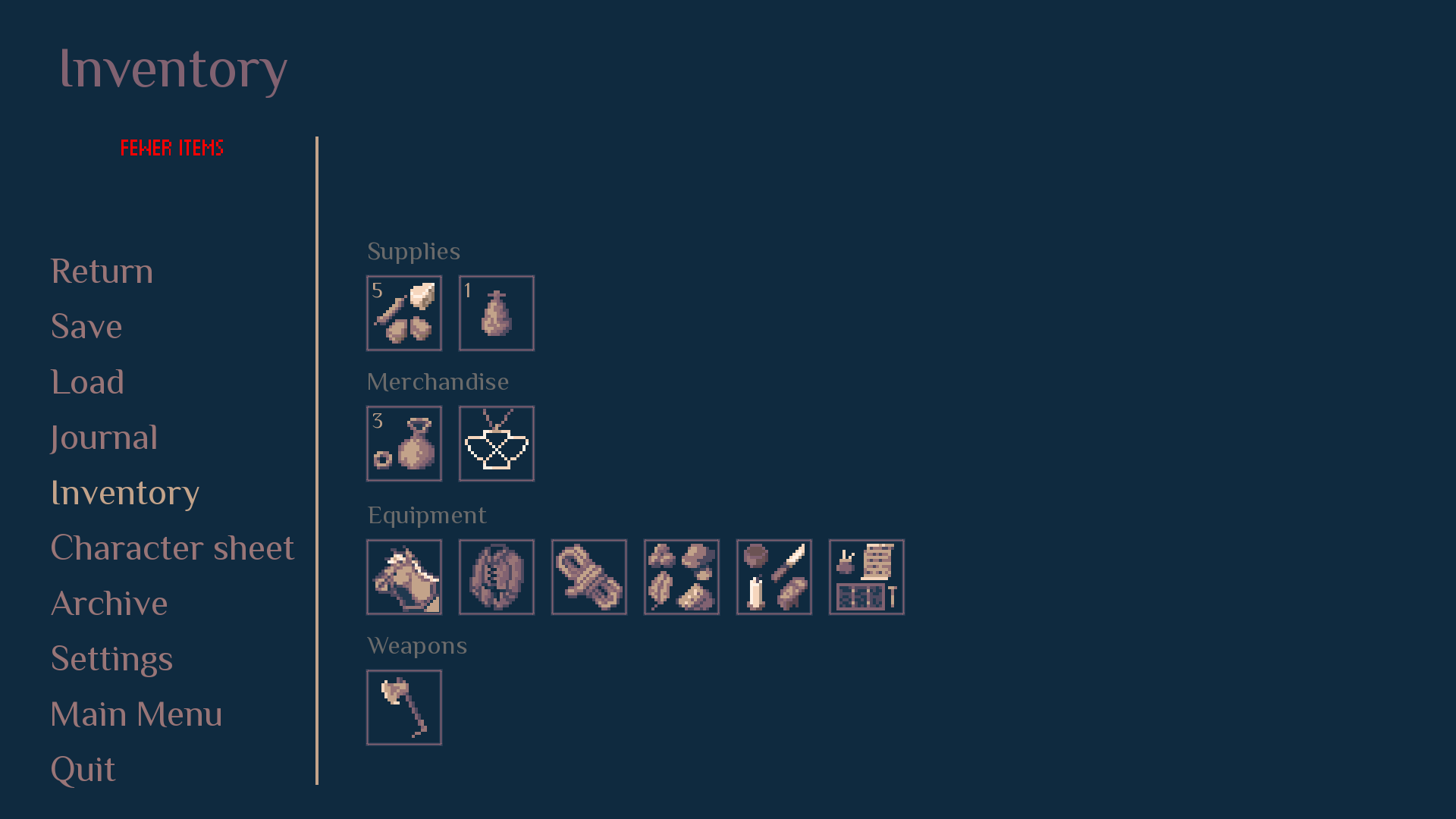 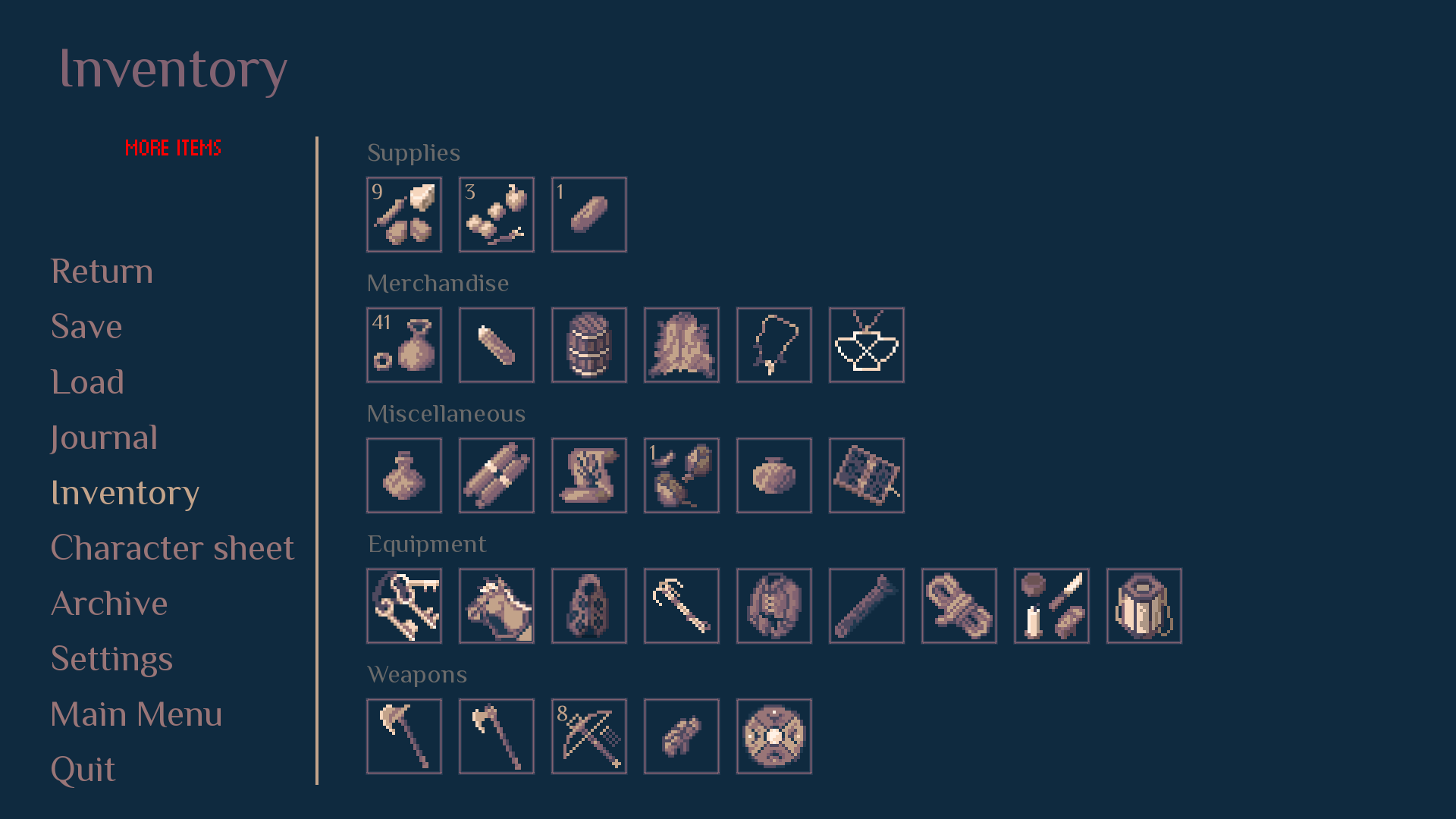 …once the player gathers enough items, it resizes, usually filling the entire screen without forcing the player to scroll down to see everything at once.

Also, while the owned coins are still meant to be displayed together with the other “Merchandise”, the game now recognizes when there are no other items from this category. In such cases, the coins are moved to the Misc section, instead of occupying the entire row by themselves. 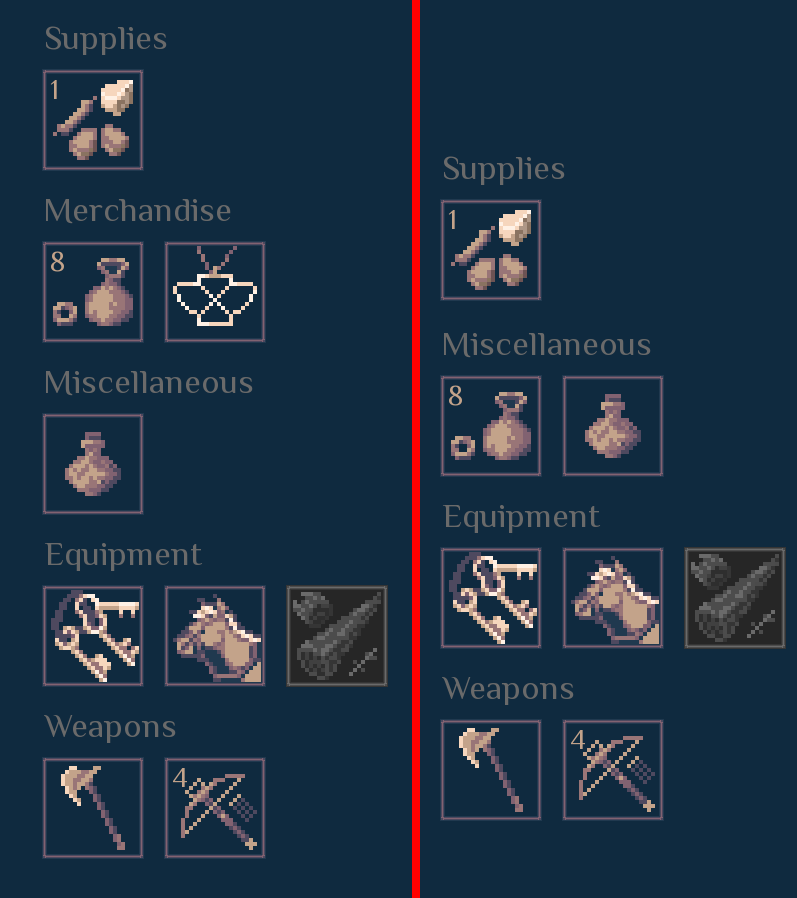 While some quests may still need updates in the journal, they now more often use gray font to hide outdated information, and horizontal lines to divide quests into sections, for example — separating the old part of a quest from the new one, which gets pushed to the top of the entry. 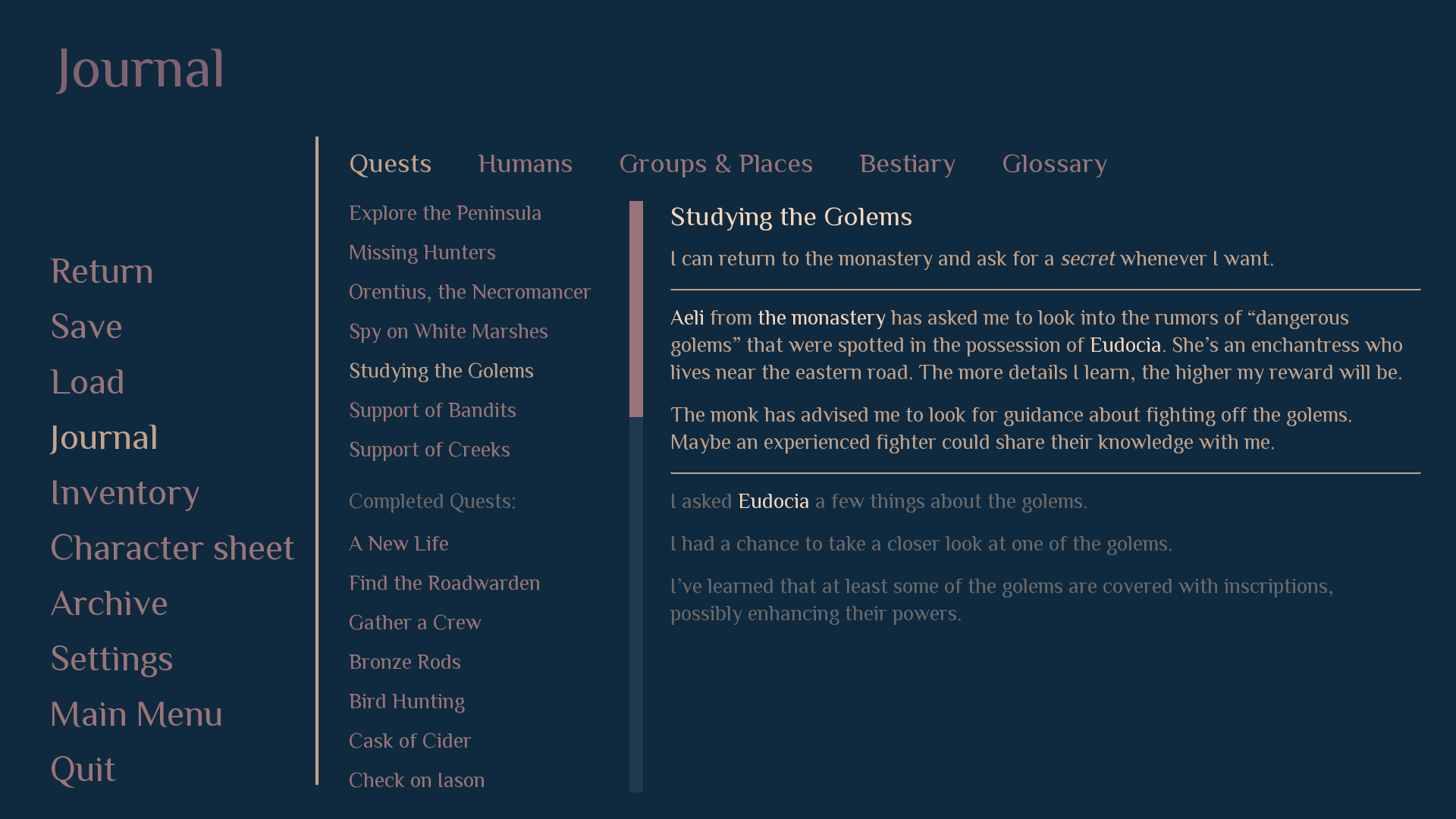 And last but not least — autosaves occur more frequently, after roughly 20 dialogue choices. It’s still not recommended to play without manual/quick saving, but the game is now more resistant to unfortunate crashes and bugs that would punish players who forgot to save in a long time.

Thank you for taking a look at this devlog, and for your support and feedback over the years!

You can also find me on socials, and Roadwarden has Steam and GOG pages where you can add it to your wishlist - I hope it will be available on September 8th!

Have a great day! 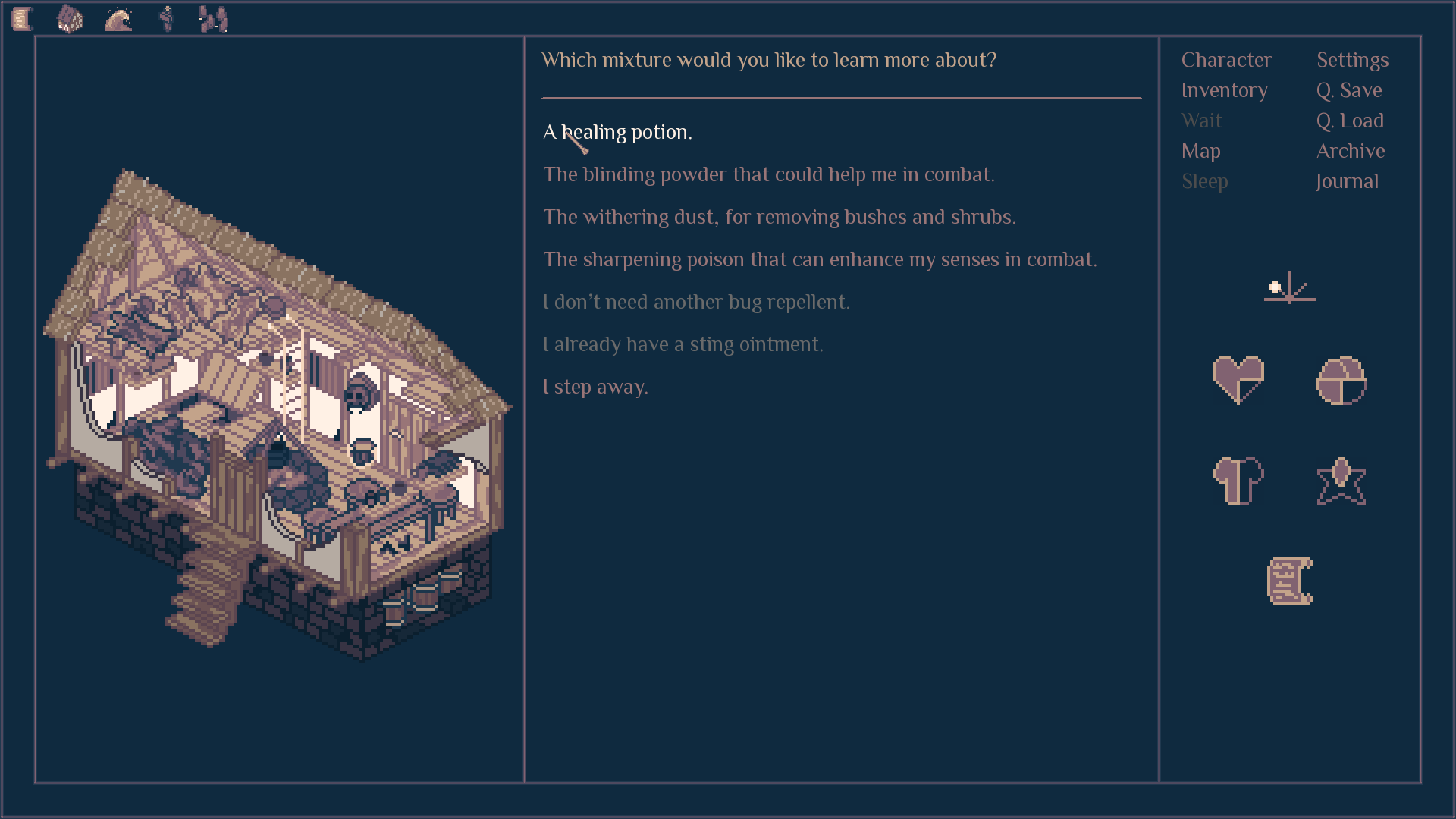 !!!! so excited for this game!! downloaded the first demo way back n loved it ever since. congrats on finishing it!!!!

Thank you so much for sticking around! : ))

I'd report that bug to the renpy developers. I assume it's assigning your string literal to the notify method, so calling the method later crashes. Hopefully there's a way in Python to protect against that kind of thing.

I'll admit that since I see myself as a complete amateur, I don't feel comfortable commenting on most things I perceive as issues to the engine developers. : ) It may be there's a good reason why the things are this way.

I looked into it with a Python developer friend. There is technically a way renpy could protect against this, but it's silly for them to do that to every method. I tried a linter/analyser called "flake8" to try and catch this sort of error but it didn't pick it up. What a strange thing about Python you have discovered :)

Congrats! I've been following for quite a long time so I'm definitely gonna try for Day One!

Thanks a lot, though I can promise you that one day is far from enough to explore the game thoroughly!

Wow, kudos on finding that annoying bug, the time one looses on something so small can make you rage like a loonatic. Also good that you changed the font, for me and my aging eyes it is now much more readable ! Looking forward to the release !

Thank you! Even after fixing that bug for my working builds I received a message from someone who played the previous version of the demo that it crashed the game for them. It felt good to not get upset about it, for once! : D

So happy that this game finally releases. I first found it around a year ago during Steam Fest, it was on top of my wishlist ever since. I'm sure I'll buy it right away. It's also nice to see, that there are prosperous indie dev's in Poland (Yeah, I'm from Poland too). Any info about the price of the game?

Thank you, it's the largest project I ever worked on, and that despite the fact it uses an already invented setting. Though I don't think there's anyone who can get "prosperous" with text-based games, in Poland or anywhere else. : )

I played the demo of this a while back and am thrilled to see release day is on the horizon. Best wishes for a smooth launch!

Thanks a lot! So far, these final days have been smoother than I expected!