Welcome to the first entry in the series of devlogs focused on Roadwarden, an interactive fiction in which you explore and change a hostile, grim realm. It’s a fantasy game, it’s an RPG, a Visual Novel, an adventure game with occasional text parsers... It’s many things. It’s a project I love.

There’s a reason why Roadwarden isn’t restricted by any specific genre and does whatever it needs. I aim to put the quality of the game first. I want it to fulfill its goals, without forcing myself to give up on some features just because they aren’t “pure” from the perspective of a marketing label. Will I succeed? Let’s find out - this (weekly?) devlog will be a fine documentation for the future retrospections.

While I started working on the project in January 2019, mostly reviewing and adjusting my older design documents that were already almost one year old, the main game announcement occurred less than two weeks ago. The website is now up, the demo is available, the press kit has the most essential details... The game is now displayed and open to criticism. Sure, it was tested before. The graphics were reworked multiple times thanks to the criticism I gathered on-line. But now I’m playing with an open hand.

And the results are better than I’ve hoped. I received a lot of positive feedback, the people who played the demo send me encouraging words, it genuinely looks like the game has a very strong foundation - what it’s lacking, is content. I’m sure some things can be improved, built upon or are yet going to be removed, but I’m feeling very positive about the road ahead.

One of the main changes that happened right before the official demo release was the introduction of the new graphics for the in-game traveling map.

The huge, out of proportion icons representing the “interactive” parts seem to be easy to spot and don’t blend with the neighboring areas, though it’s something I have to keep an eye on.

The main inspirations for me were the world maps from the Baldur’s Gate series, especially the one from the Shadows of Amn. When I was a kid, I really loved how the visuals allowed to settle an area in a larger context. A very similar type of maps was presented in Pillars of Eternity, and I’m grateful for it.

III. A look at the inside of the Clean Spear castle-tavern

Now that was a rough one. I’ve decided to draw the interiors of my somewhat-famous castle-tavern, but I wasn’t sure how to approach it. 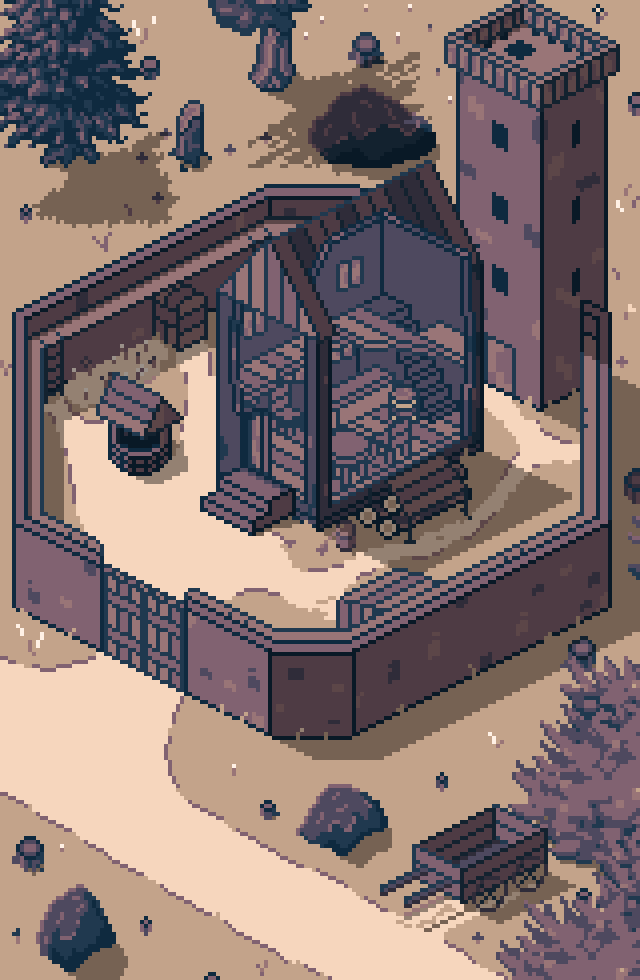 My first try was actually pretty decent. The goal was to make a nice picture within a rather short time. Cutting through the walls and the roof was a lot of fun, but I wasn’t able to add that many details into it, even if the corner in the front was removed. Also, the proportions got a bit crazy, and the second floor was pretty much outside of my reach...

So I've decided to make the longer route (which took me pretty much another full day) and I’m very happy about the results. 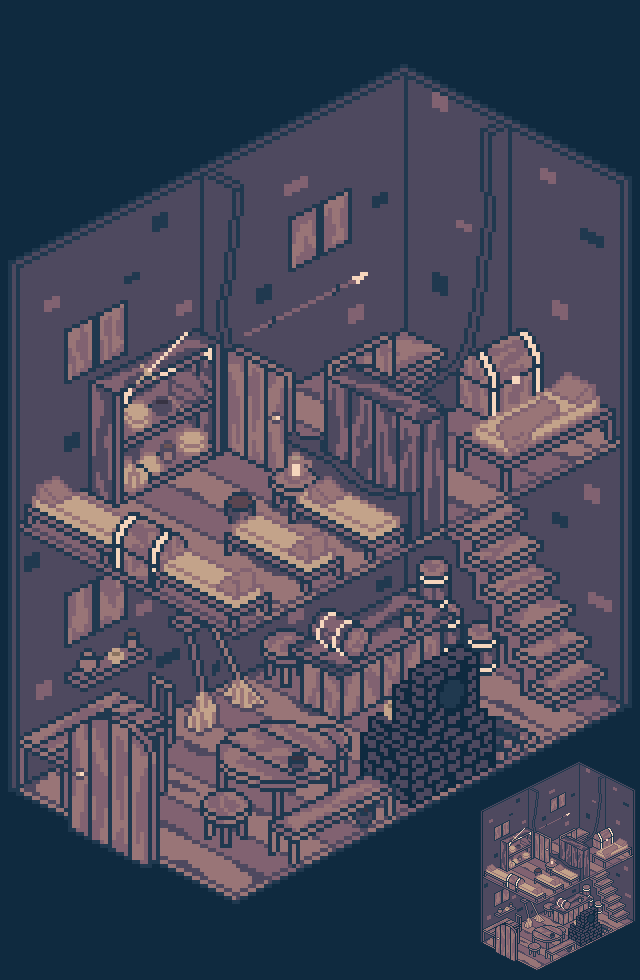 Since I’m still an amateur, usually when I draw, I spend days making the first few sketches and learning how to make the simple shapes, and after that I make one revision after another... But not this time. I knew exactly that I wanted to make a hybrid of a simple, early medieval castle and of a cozy tavern. It went very smoothly and I had very few fixes to apply. I’m very happy with the results.

A small, new feature is related to the game’s traveling system. I’m not sure if I’m satisfied with the way it looks now, but it’s very smooth and I think it adds a valuable bit of immersive descriptions. From now on, if the player moves from one area to another, they may see bits like the description shown below: 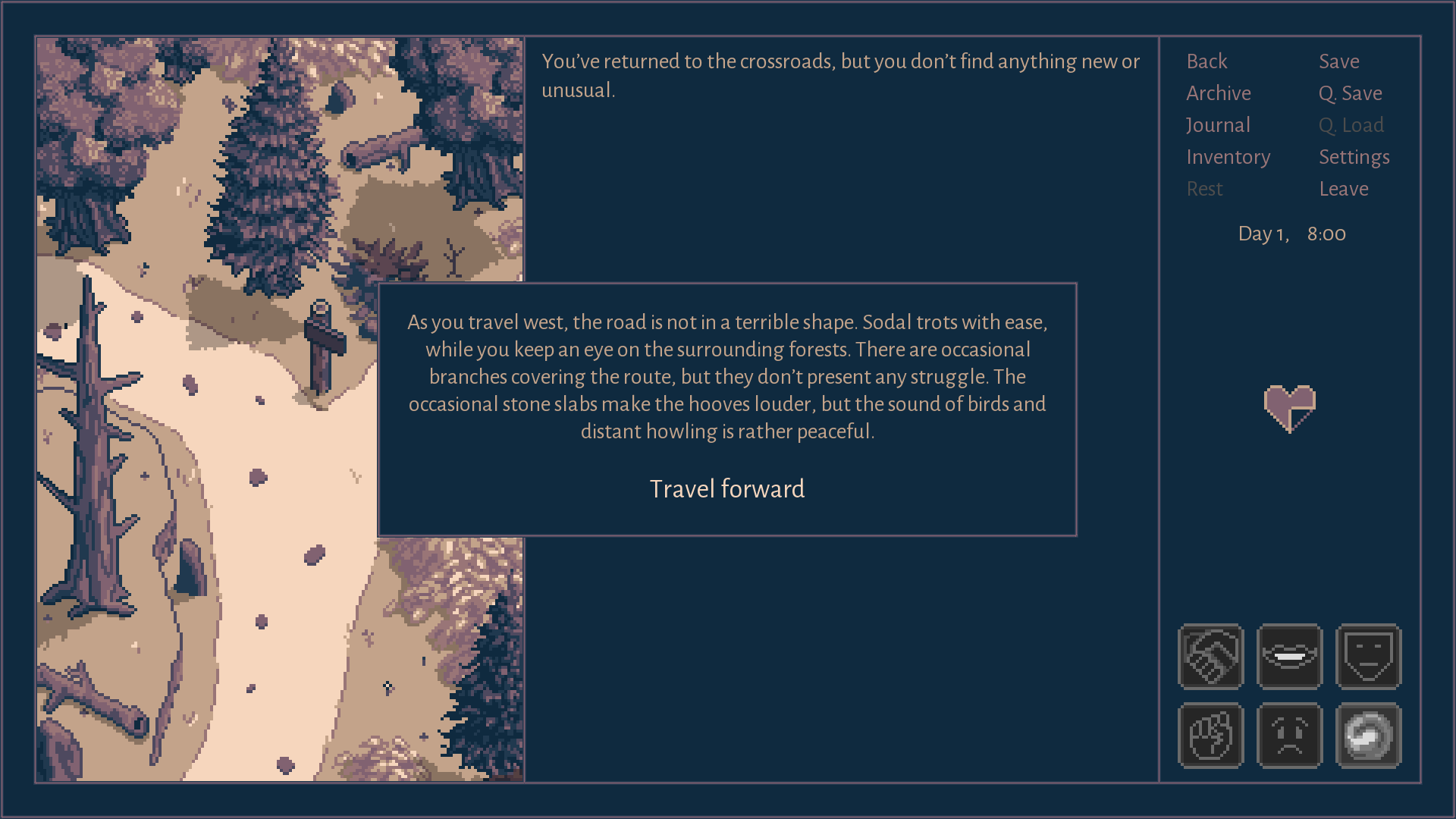 Such small textboxes can be portrayed only when a specific set of conditions is matched. For example, if the player is in an area “Southern Crossroads” and moves to the closest area to the west, they see the description from the box - but only once. However, if they travel there from another area or they visited this place before, the box won’t appear. There’s also a different description linked to the eastern road.

These small boxes are only the very raw template. Their visuals may change, they can involve random encounters, introduce new events... This tool is going to serve me in many ways.

Another small invention is the option to modify parts of the area descriptions based on the randomly set variables.

For example, when the player visits the Clear Spear tavern, a variable guardscleanspearactivity (once again: Guards-Clean-Spear-Activity) is rolled. And it currently has these options on the list:

· spread across the wall, observing the area

· practicing close combat with spears, swords and axes on the courtyard

· sitting at a table and on the stairs, gossiping with mugs of beer in their hands

· practicing archery and fixing their equipment in the courtyard

· are nowhere to be found

· sitting at a table, gambling for apples

So when the player sees a description like this one:

The Clean Spear tavern stands firm. You notice one of the guards nearby the gate, but he doesn’t show any interest in your presence. The gate is currently open, and you can see the other fighters [guardscleanspearactivity].

...the final part of this line is meant to be replaced by the variable’s value.

It should work. And add a bit of colorful illusion.

Of course, there are other parts that influence this description (especially - the time of the player’s arrival), but in general it helps me introduce minor, cute details without making a bunch of completely new descriptions.

Suddenly, both the Twitter and Facebook of Roadwarden passed 500 followers / likes. And I have nothing to celebrate it with.

I’ll try to make something cool later on, but maybe this tweet will say more than a thousand words: 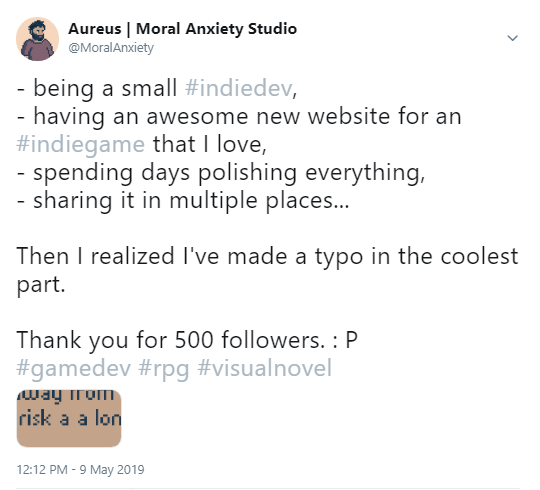 Thank you for your attention and I hope to see you next week! For now, I want to focus a bit more on writing the new dialogues.

You can feel your passion for this game in your writing :) Looking forward to seeing this develop.