A closer look at the demo - Roadwarden Devlog

The first version of the Roadwarden’s demo has gathered quite a bit of attention. Thanks to all the comments, suggestions and testing, I was able to gather enough feedback to put in some extra time and fix the things that could (and should) be improved, even though I originally planned to jump into all the new content that I have in plans. Writing, mostly.

That doesn’t mean that the version 0.3 has no new content at all - I’d even say that these additions are something that was missing and now provides a much better portrayal of my vision. This demo fairly portrays the gist of what I want Roadwarden to be.

Nevertheless, unless a large bug that’s going to need an instant intervention will be found, I don’t plan to push for version 0.4 in the nearby future. Maybe a month, two months before the game’s release.

If you haven’t played the demo before, this is the version that I would recommend. In this devlog, I’m going to take a closer look at some decisions and changes that I’ve made.

The Mac version is now available.

Ren’Py, the engine I’m using, has a built-in build export for Mac systems. Since I don’t have any Macs around, I wasn’t sure how well it’s going to perform. It looks like it works like a dream and the people who tested it had no visible issues. If you find any, please get in touch!

I won’t test any mobile builds for now. It’s going to require resizing all sorts of in-game menus, and I can’t handle this level of boredom for now.

The achievements don’t kill you anymore.

I’m surprised (and relieved) that only one person have encountered this problem. From now on, clicking on the received achievement won’t crash the game. Fixing this took only a minute, but I can’t believe I didn’t notice it earlier.

You can switch the font to a pixel one.

Whenever you want, you can switch between a pixel-artish font (which looks nice) and the regular font (which is easier to read). The regular font is still used by default and I hate the idea of playing with pixel fonts for more than half an hour, but I saw so many questions focused about more “stylish” option that I decided that players should have a choice. 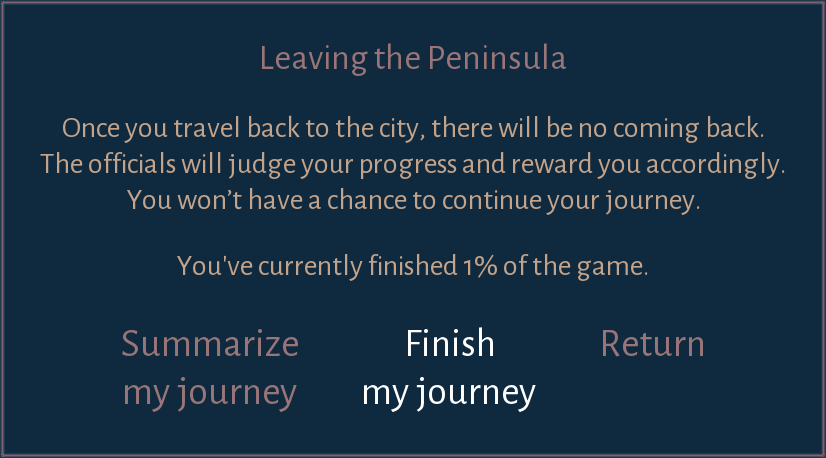 Now you can actually beat the game! (and unlock the worst endings)

Since Roadwarden is going to have a very unusual story structure and is, in some way, an open world game, I expect that not everyone is going to aim for the 100% completion. The player is going to be able to finish the game whenever they want - even in the middle of the tutorial. 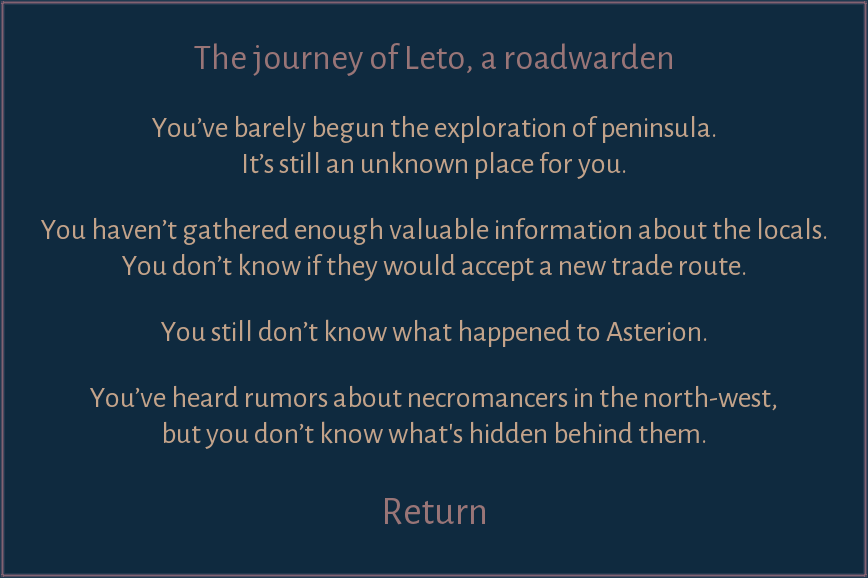 Also, they can read a summary of their journey. The summary will get more and more detailed as their playthrough goes on, and its purpose is to let the player quickly remind themselves what they’ve already accomplished and what quests are still open. Hopefully, it will allow me to limit situations when the player finds the game weirdly pessimistic or “too” positive.

To finish the game, you just need to “travel” from the map to the city. I’m still not sure how the related icon should look like. It currently blends in with its surroundings a bit too much. I consider it to be a WIP.

A cool detail is that the ending you currently receive, which is the “worst” possible one (since you fail all your objectives), is partially related to your character’s main motivation - the one that you have selected during the tutorial. The entire section is still going to need some new graphics, but even now I’m pretty happy with it.

Rolling back works better with various menus (like the map and sleeping menu).

Using a mouse or keyboard to “roll back” when a map or other complex menus are displayed sometimes created issues. From now on, it will only close the displayed menus, without instantly jumping back, what’s going to make the game more stable. 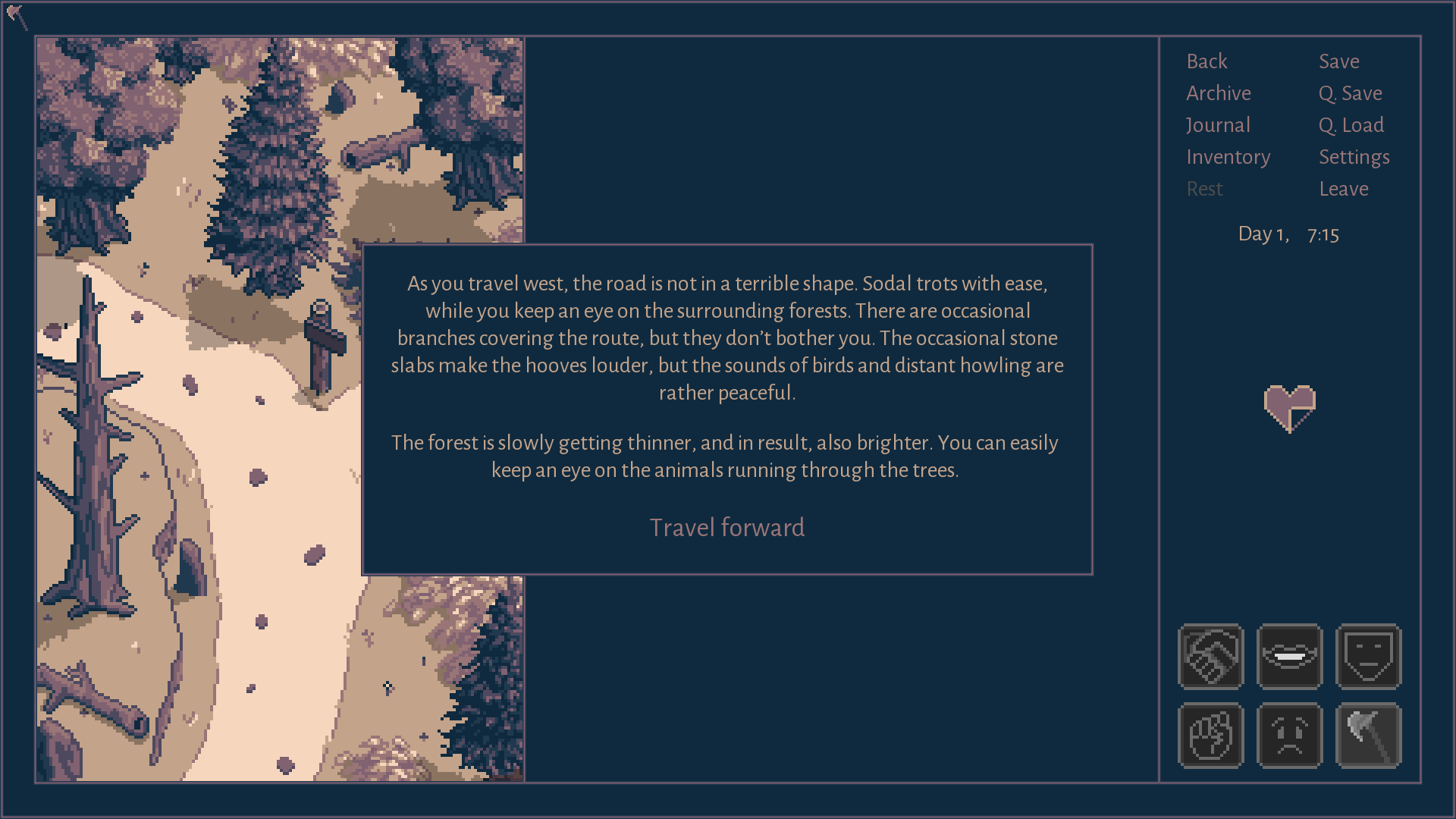 Two weeks ago I described the new tool allowing to display short descriptions appearing during the player’s journey from one area to another. They are now present in the demo and work a bit better, since the older pieces of narration are now hidden. Currently, if you’re in the Southern Crossroads and move either to the dolmen or the tavern for the first time, you’ll see new textboxes with bonus descriptions.

This tool will also make random encounters much easier to implement.

Added a couple of options to the dolmen.

Parsers in the dolmen respond to more commands, such as entrance. Also, a small bug involving the secret chamber was fixed - there was a very specific order of choices that would pretty much bug out one of your actions, which is no longer the case.

Pointing at your HP was reworked.

The description of the character’s HP level won’t cover the main box with narration / dialogues and is generally more responsive. Previously, the description wasn’t being displayed when you pointed at the “empty” parts of the heart. Now, the heart is actually not empty at all - the “empty” section is 1/255th of pure black, what means that it’s pretty much an invisible, transparent color. 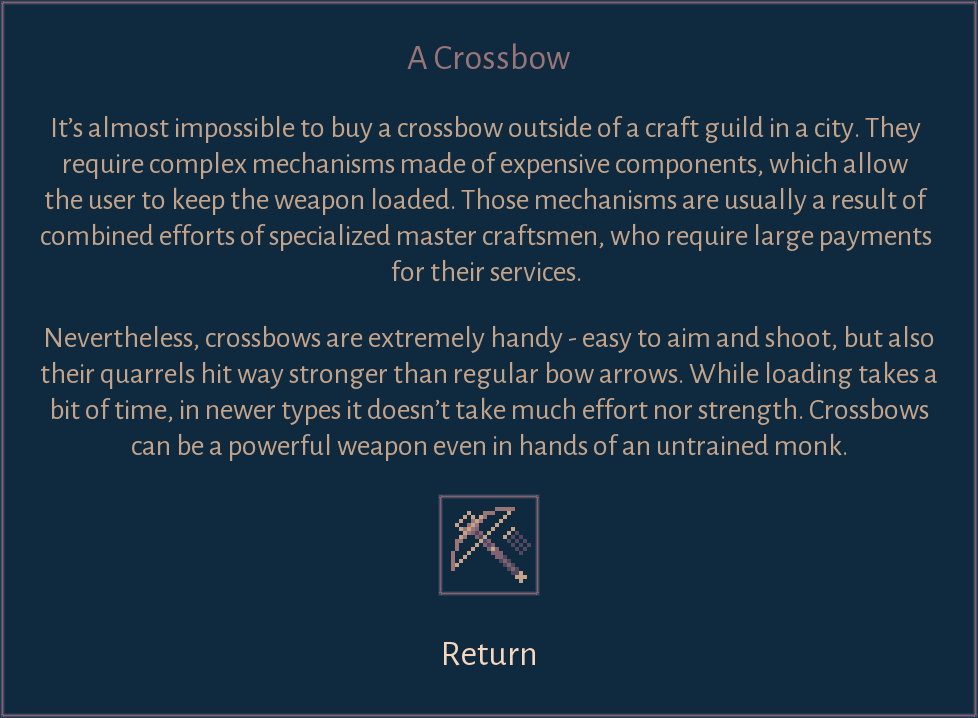 Fixed some typos and rephrased a couple of things.

The item descriptions from the inventory made me especially angry when I re-read them a couple of days ago. Now I proofread them with a cool mind and rewrote some bits to make them more interesting and cohesive. There were also some typos and awkward phrasing in the dialogues / narration, but probably the main change is the replacement of the player’s choices which included present continues with present simple. Previously, it kept changing between those two, and I think both choices would be decent, but it was important to finally settle on one of them. And the simple sentences tend to be shorter, what plays a difference when we take into consideration thousands of choices.

Added “locked” areas to make it easier to notice when the demo ends.

Just a small thing made for the sake of the demo. Some people were confused when they reached all the areas and weren’t sure if there’s anything else they can do. I think this will make it clear.

I’m currently sick and overwhelmed with outside-of-development issues, but the future looks bright. See you soon!