Since Roadwarden is set in a semi-open world, its story is not linear and not divided into “chapters” per se. However, I do like to think that the development process is, indeed, divided into episodes - chunks of the world that include a significant part of the content.

The first “chapter” was involving all the areas presented in the tutorial, while the chapter I’m working on for the last couple of weeks includes the south-western part of the map, from Clean Spear tavern to the edge of the swamps. However, the development is not fully focused on writing new dialogues and quests. There are many details related to the interface and general design issues that require additional effort, and while it would be nice to completely invest time in drawing and writing, it’s crucial to fix every issue as soon as possible, before they roll over me like a boulder. 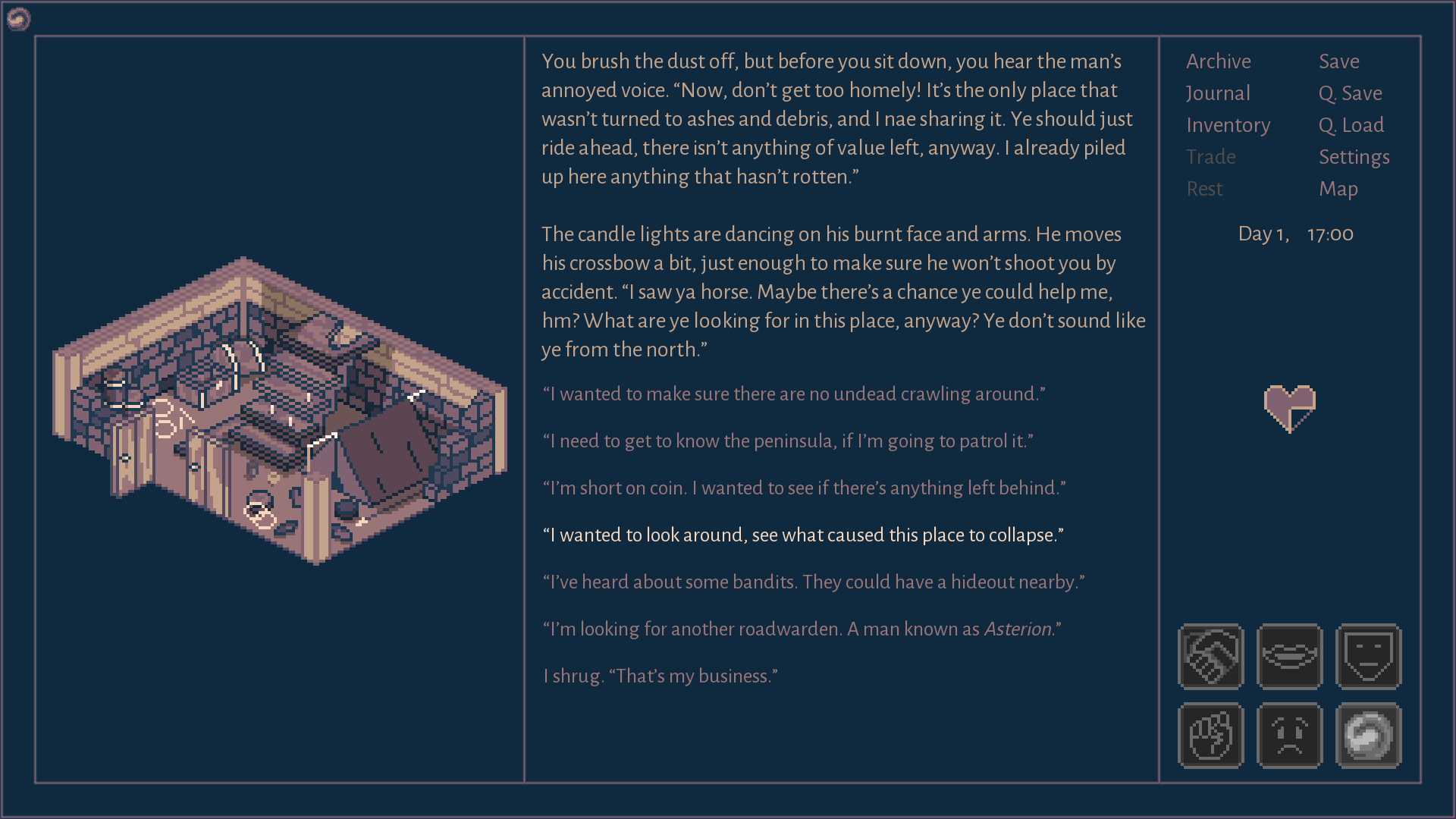 From now on, there’s no “back” button and no option to just “roll back” your dialogue to change the decisions you’ve made. While it’s arguably less convenient, it’s meant to support the feeling of tension and support role-playing, without being constantly focused on making the most “optimal” decision. I hope to encourage players to go with the flow.

Still, the saving / loading spam is a completely valid option, so if you prefer to keep pressing F5s and F8s, it’s up to you. 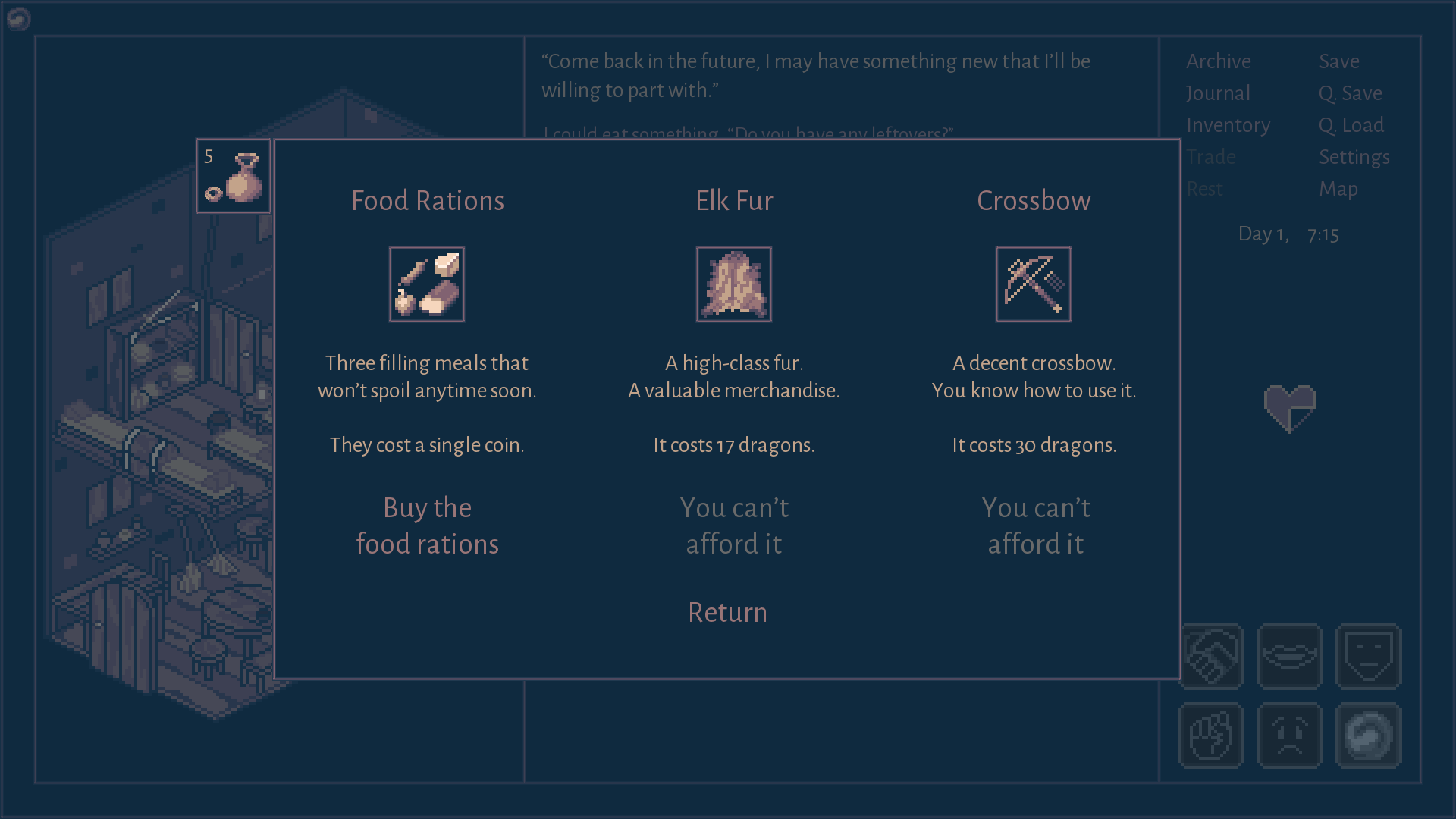 It took me quite some time, but here we are - the shopping screen was redesigned, rewritten and now presents all the required information much quicker. You can “open” the shop screen with the new “Trade” button in the quick menu, what makes it much more intuitive. And, of course, this functionality can be used in different ways as well. 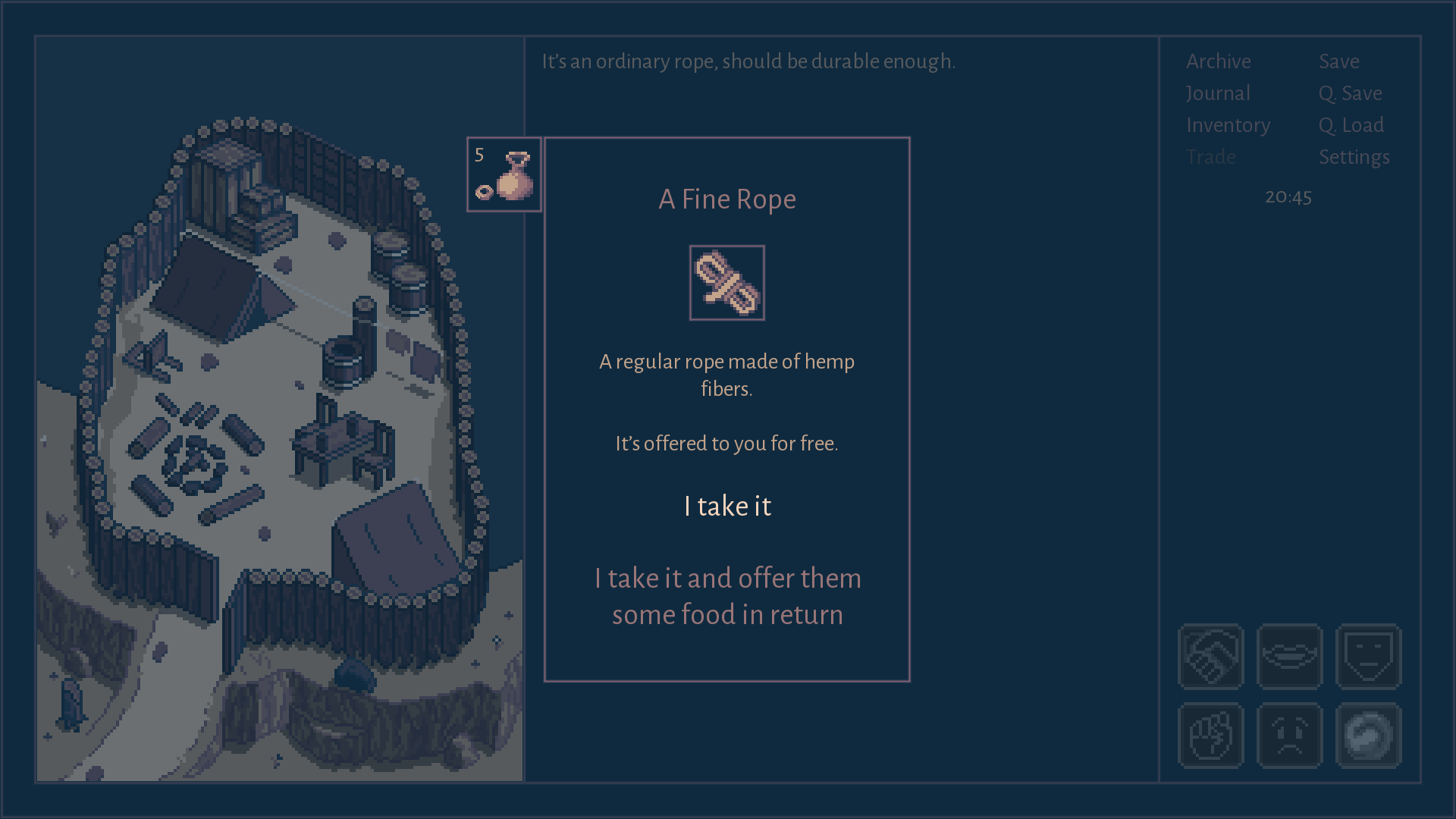 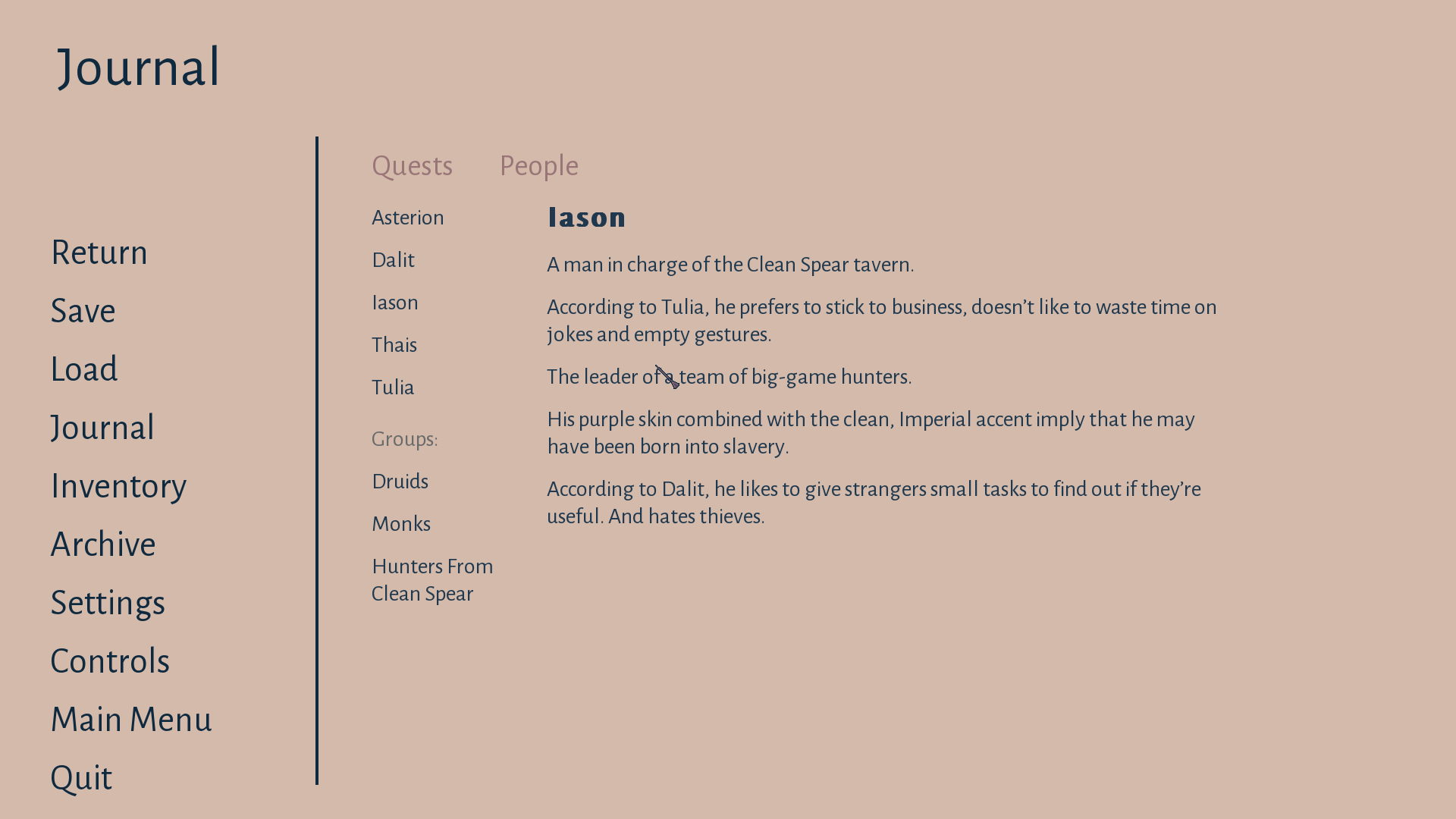 It took a lot of effort, but I think it’s a time well spent. From now on, the journal can have subsections, and first one of these subsections is going to store the information gathered about various NPCs. Even if you don’t need such notes, it’s important to have all the characters stored in one place - after all, names used in this setting are a bit unusual, and sometimes you have to type them. 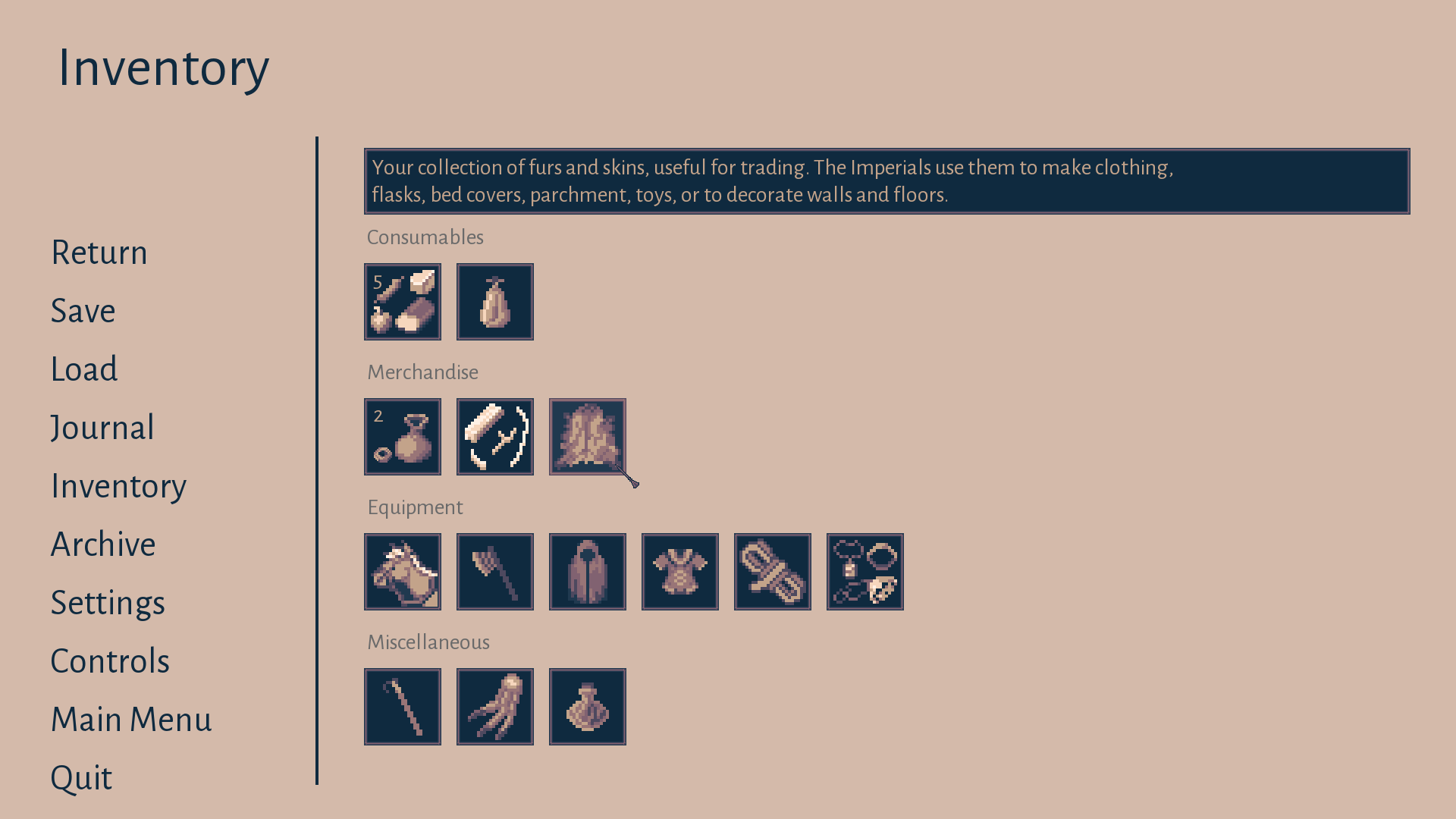 From now on, the inventory screen is going to have subsections. While for most of the time you’re still going to be able to see everything you own at once, it will be less messy. The amount of these subsections and how will they be named may still change, but it’s a start. 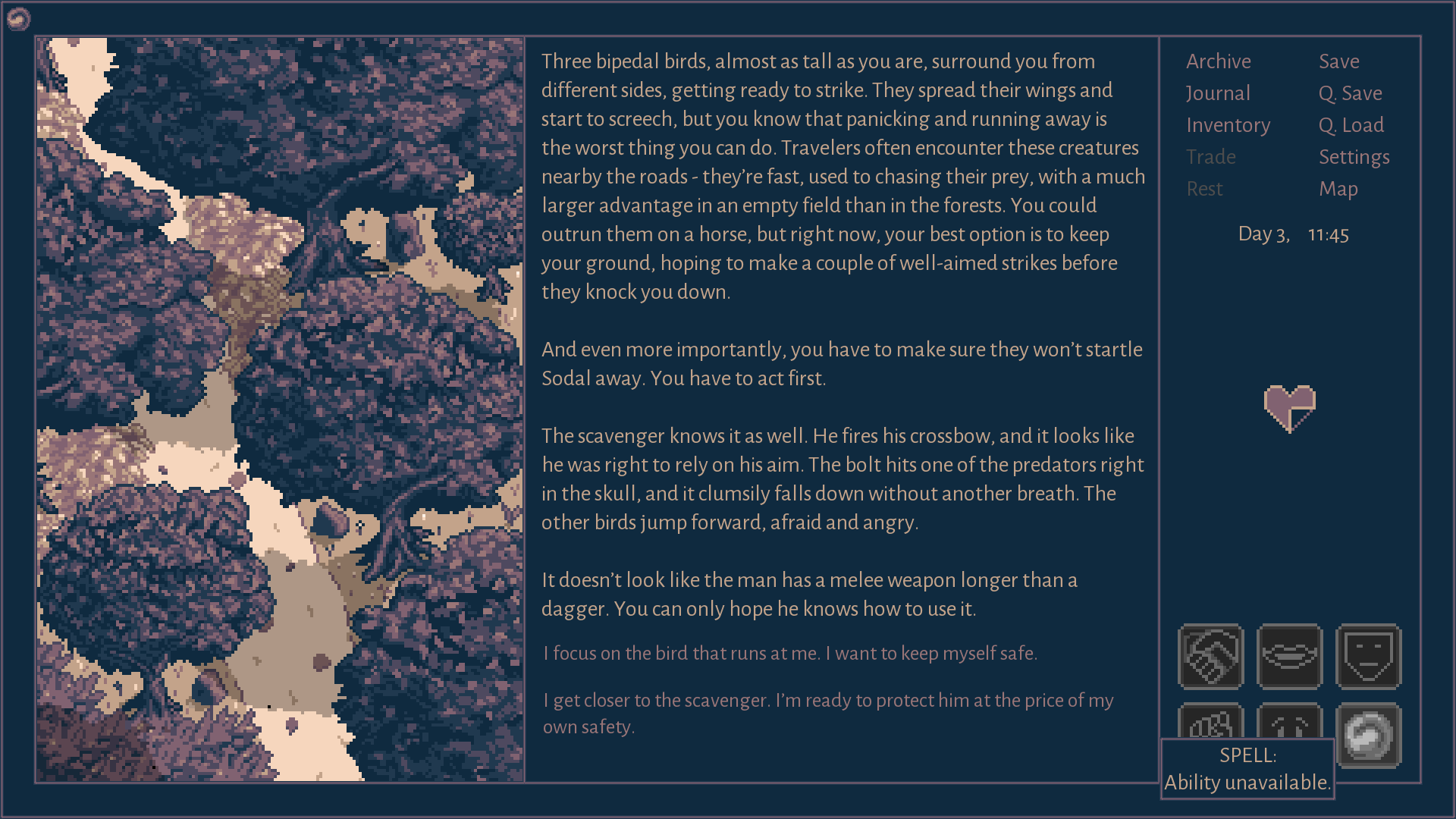 I saw many questions related to combat - how does it look? What does it involve? While there’s not that many fighting presented in the game, it doesn’t really involve a special interface or a completely different style of gameplay. Here you can see an example of a small encounter. It’s still related to your decisions: do you prefer to protect yourself, or to keep the NPC in one piece? And yes, you’ve already had a chance to spend some time with and decide if you like him.

While you can’t “lose the game” during this encounter, its ending may vary, and you can increase your success in some minor or major ways. If you use the “warrior” character class, it’s easier for you to win, and you can also keep yourself safer by, for example, giving the NPC a better weapon. All of it, however, uses the same “style” of interactions. 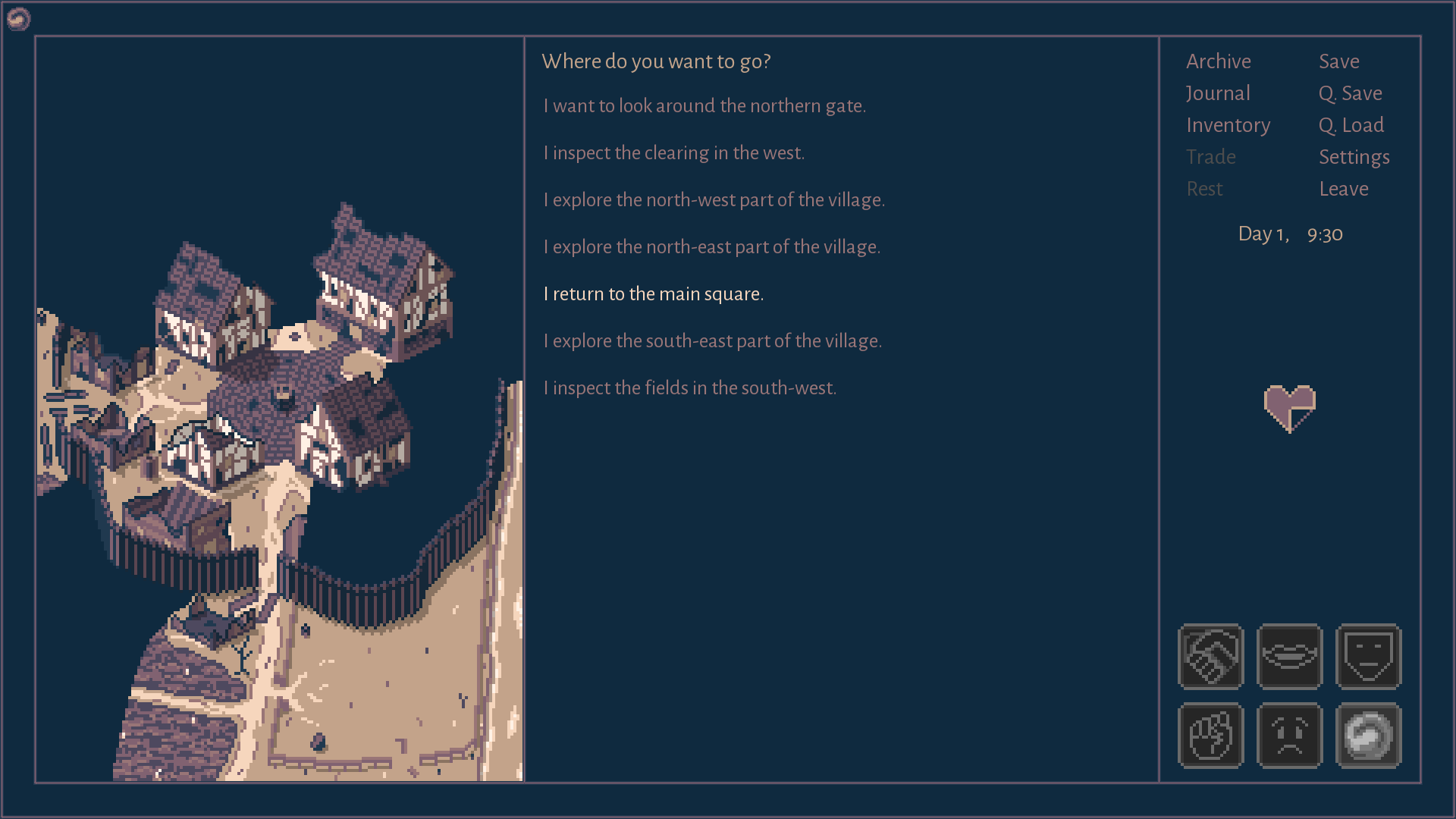 But honestly, I’ve made such a huge progress recently. <3 I could drop here dozens of bits of dialogues, quests, items and things that are just plain weird but fun, but it would be pointless. Describing all of them would take a lot of time without explaining much, so I’ll just leave some new fun things here for you to see. In general - I believe the game’s content is now tripled since the demo was released. 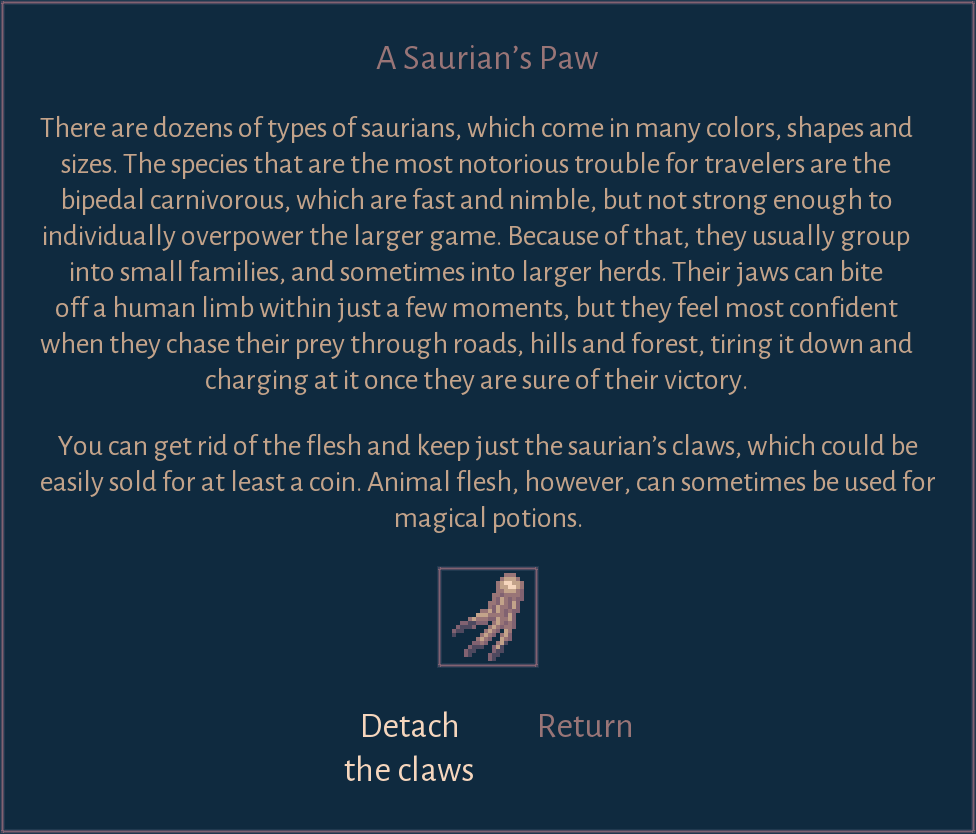 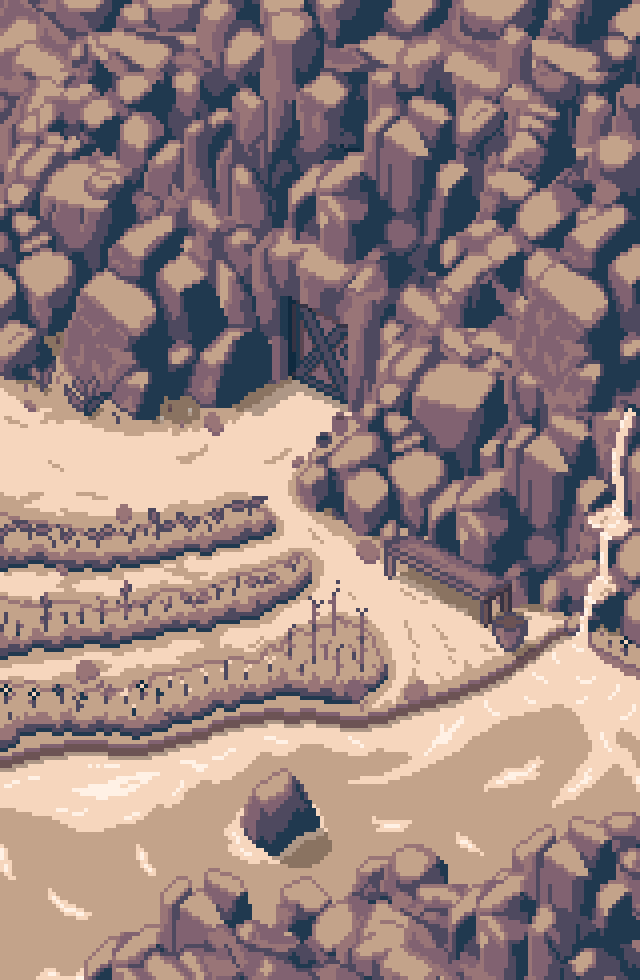 Working on the more “general” issues is still not over, but for some time I’ll be able to focus more on writing and drawing. A lot of good things are on the horizon - it looks like Roadwarden may have found a publisher after all. While the game’s release is still a part of the distant future, there’s already a date in my mind. I probably shouldn’t share it yet.

Thank you for taking a look at this devlog, for your support and kindness. Remember, you can also find me on Twitter and Facebook. Have a great week! 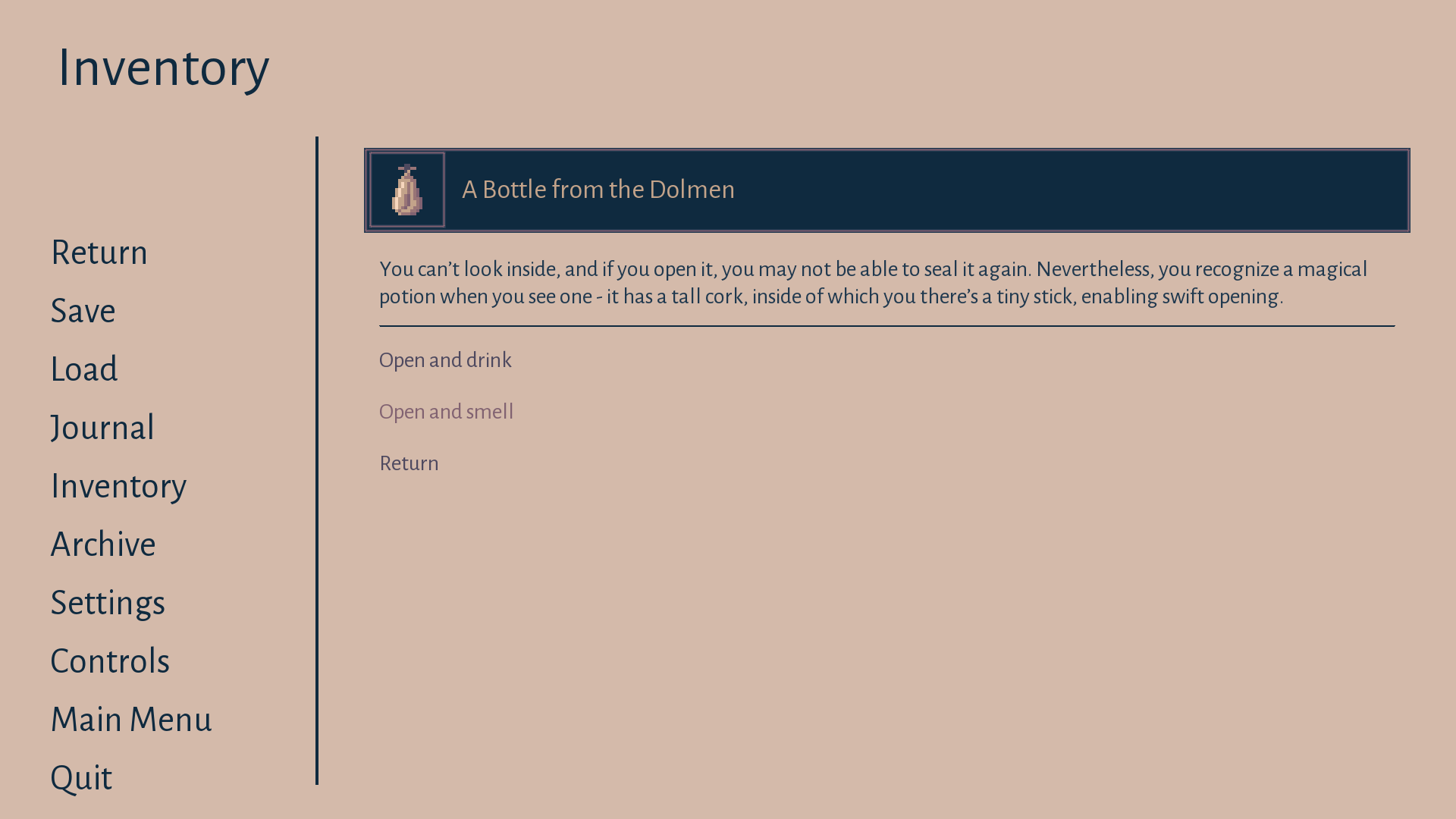 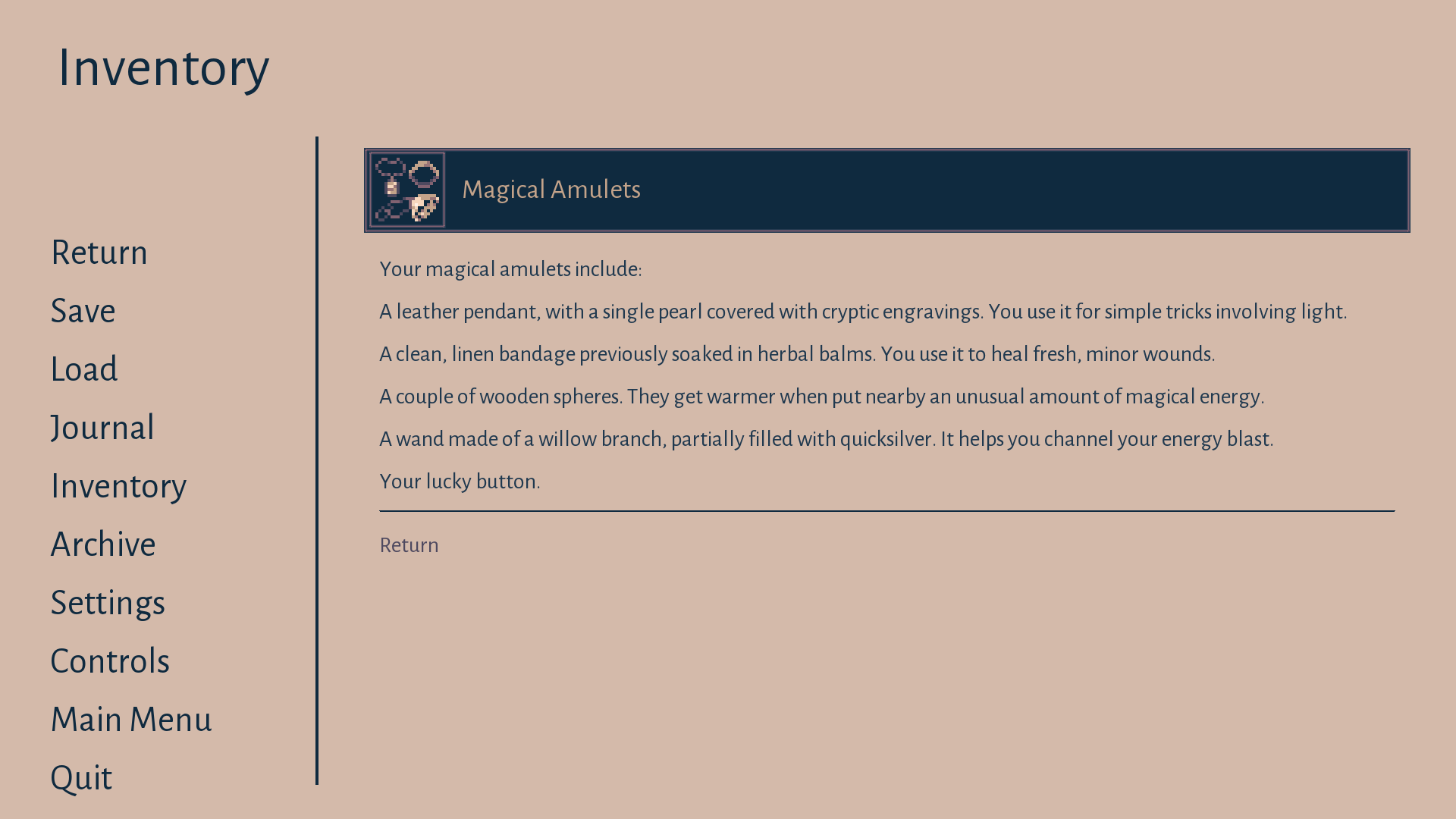 I'm excited to see this much progress! Looking forward to seeing the game grow even more!

Great update, thanks for the info!

thanks for the update. looks lovely. All the best for the future production process!